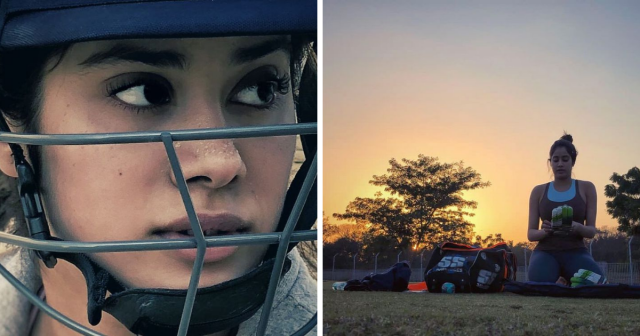 Celebrated Hindi cinema actress Janhvi Kapoor shared a couple of still from her cricket camp alongside Dinesh Karthik for her upcoming sports-based drama ‘Mr. And Mrs. Mahi’. Along with Jhanvi, the film stars Rajkumar Rao and will be produced by Dharma Productions.

It is learnt that Dinesh Karthik is training Janhvi Kapoor for her upcoming assignment and the cricketer was spotted in a couple of pictures shared from her official Instagram handle. As it looks, the actress is portraying the role of a cricketer in the film and she is practising really hard to get her shots and stance perfect.

Dinesh Karthik was also spotted batting in the nets while the director of the film Sharan Sharma donned the wicket-keeper’s gloves. The veteran wicket-keeper batsman, who has no professional commitments now, is spending time with commentary and training.

In November 2021, Karan Johar had announced the film on his social media handles with the note that read:

“One dream, chased by two hearts. Presenting #MrAndMrsMahi, directed by Sharan Sharma who is back with another heart-warming story to tell with his touch of magic! Starring Rajkummar Rao & Janhvi Kapoor, a partnership to look forward to. See you on the field aka the cinemas on October 7, 2022. ”