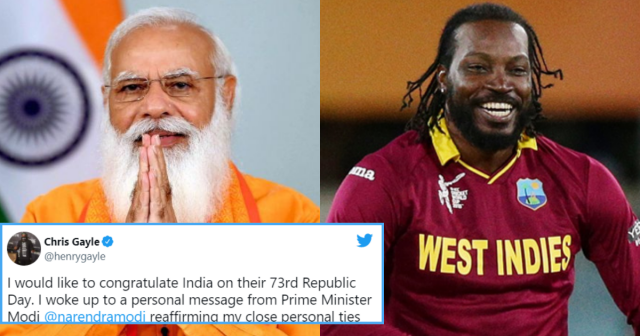 I would like to congratulate India on their 73rd Republic Day. I woke up to a personal message from Prime Minister Modi @narendramodi reaffirming my close personal ties with him and to the people of India. Congratulations from the Universe Boss and nuff love 🇮🇳🇯🇲❤️🙏🏿

During IPL 2021, pacer Mohammed Shami had revealed that Chris Gayle loves the Indian culture and often tries to speak in Hindi and Punjabi. “Chris Gayle loves to speak in Hindi. Most of the time, he likes to have fun in Hindi. While talking in English, he suddenly starts speaking in Hindi. The way we hum songs in Hindi, he speaks (Hindi) in the same way. Punjabi Cricketers from our team teach him Punjabi as well”, Shami had told ABP Ananda.

According to reports, Christopher Henry Gayle has not registered for the upcoming mega-auctions which are set to be held in February 2022. In his 13-year IPL journey, Gayle has played for three franchises- Kolkata Knight Riders, Royal Challengers Bangalore and Punjab Kings.

Gayle scored 4965 runs in the IPL, averaging 40 with 6 centuries and 31 fifties at a strike rate of 149. In the tournament’s history, he holds multiple records, including the most centuries (6) and the best individual score – 175*. He has smashed 357 sixes in the IPL, which is the most by any batter. AB de Villiers at the second spot is behind Gayle by a margin of 106 sixes.

Gayle is extremely famous in India, where his entertaining batting has enthralled the fans over the years. Especially, his stint with RCB will be remembered for a long time. Even today, everyone expects a GayleStorm whenever Gayle bats. He is a T20 superstar, and all the IPL fans will definitely miss the fireworks from his bat.

So @henrygayle hasn't registered for the #IPLAuction2022 auction. I guess it means we have seen the last of Gayle, the player, at the IPL. If indeed so, it is time to stand up and applaud one of the finest and most charismatic players at the IPL. He was a big part of its growth