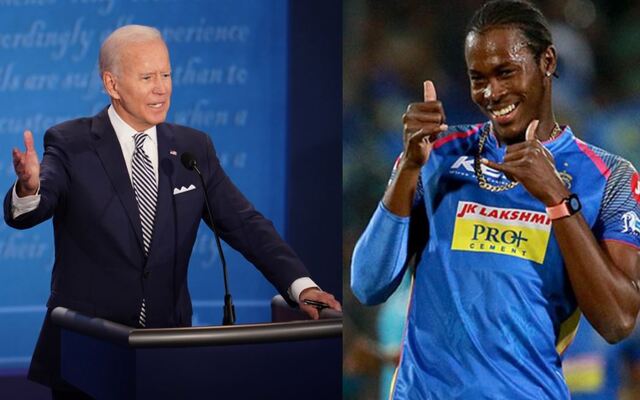 England pacer Jofra Archer is one of its kind as barring his performance we see him in the news for his age-old tweets almost every day. Recently after the Former Vice President of the USA Joe Pence under Barack Obama was elected as next president of the USA replacing Donald Trump another tweet of Jofra was seen doing the rounds on social media.

This time around as well Jofra has done the unthinkable as his tweet dated 4th of October 2014 has been going all Viral as people are now coming out to say Jofra already knew who the president of the USA would be in 2020.

‘Joe!’ was the word tweeted by Jofra Archer and people have found its reference to the 2020 presidential elections where Joe Biden was the President-elect as he defeated the current President of the United States Donald Trump by procuring 290 votes so far when 270 votes for the minimum requirement to be victorious in the elections.

Joe Biden’s win in the elections means that Donald Trump won’t be having a second term as the President of The United States. It was also announced that Kamala Harris would be the first woman to the Vice President of the country.

Talking about Jofra Archer, he’s had a disappointing season with the Rajasthan Royals franchise as they failed to qualify for the playoffs for the second consecutive season. Though Jofra didn’t fail to impress with the ball as he finished the season with 20 wickets under his tally in 14 matches this season.