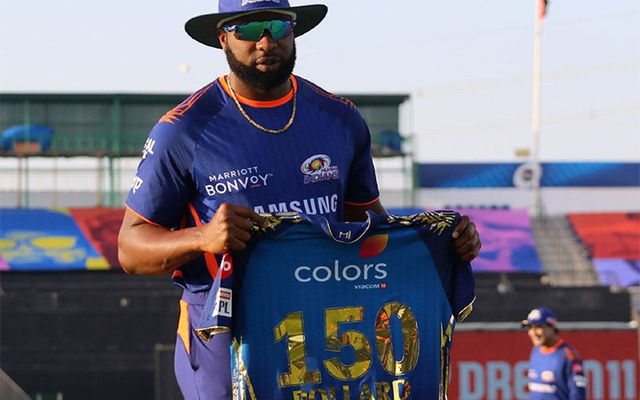 Destructive all-rounder Kieron Pollard has become the first player in the history of Mumbai Indians franchise to play 150 matches. At the same time, he’s also the fourth overall player in IPL history to achieve the feat. Pollard is makings his 150th appearance for Mumbai Indians in IPL against Kolkata Knight Riders at Abu Dhabi.

Mumbai Indians franchise acknowledged the landmark presenting Pollard with a special jersey. Also not to forget Kieron Pollard is coming into this IPL after guiding the Trinbago Knight Riders to the Caribbean Premier League title. As a result, this will be a very special year for the batting all-rounder.

Kieron Pollard is an all-time legend for the Mumbai Indians franchise. He is sitting behind four legends when talking about most appearances. First up is RCB skipper Virat Kohli with 178 appearances, followed two CSK stalwarts in the form of Suresh Raina with 164 appearances and MS Dhoni with 162 appearances.

Followed by Pollard’s 150 appearances is the franchise’s captain Rohit Sharma who has played the most number games for the Mumbai based franchise with 145 appearances.

Pollard’s impressive performance in the 2009 Champions League Twenty20 and the Big Bash led to him being one of the most sought after players at the 2010 IPL auction. After some aggressive bidding, the Chennai Super Kings, Kolkata Knight Riders, Mumbai Indians and Royal Challengers Bangalore all bid the maximum allowed; $750,000. A ‘silent-tiebreaker’ was won by the Mumbai Indians.