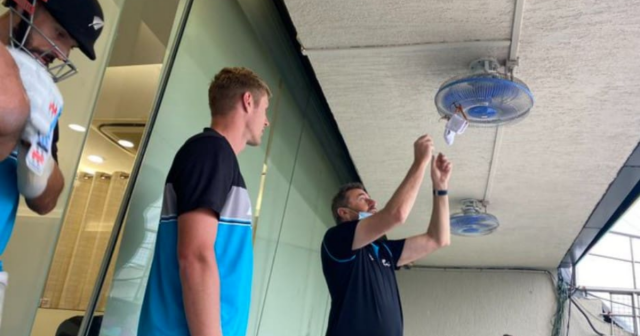 The second and final Test match between India and New Zealand is underway at the Wankhede Stadium in Mumbai. From Indian skipper Virat Kohli’s controversial LBW dismissal in the first innings to NZ spinner Ajaz Patel’s 10-wicket haul, it has been an eventful affair so far.

Meanwhile, Kiwi pacer Kyle Jamieson ran into a laundry problem on the morning of the second day’s play at the Wankhede Stadium. Blackcaps manager Mike Sandle was observed assisting him by attempting to dry an item with a fan.

A picture of the same uploaded on the microblogging site twitter by the Black Caps official Twitter account, has gone viral. In the picture, Kyle Jamieson can be seen calmly watching his equipment being dried from the ceiling fan.

On Day 2, while trying to hit left-arm spinner Axar Patel for a six, Kyle Jamieson outside edged the ball. After the ball rebounded back from wicketkeeper Wriddhiman Saha’s gloves, Shreyas Iyer standing at Silly point completed an amazing catch diving towards his left to end New Zealand’s innings.

In their first innings, New Zealand were bowled out for just 62 runs within 28.1 overs. The Kiwis lost wickets at frequent intervals, and none of their batters got into their rhythm. With skipper Tom Latham and Ross Taylor both falling out cheaply, the innings never really got going.

62 is a team’s lowest total in a Test innings at Wankhede. It’s also the lowest total by a team against India in the history of Test cricket. Thus, India is definitely ahead in the match after knocking New Zealand out for such a low total in their first innings.