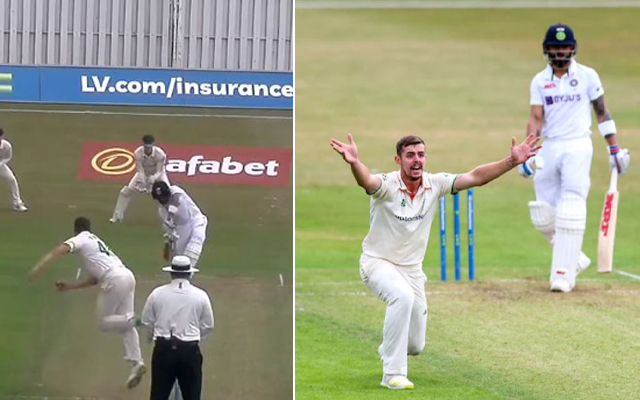 Leicestershire bowler Roman Walker expressed that it was a special moment to dismiss Indian batter Virat Kohli in the first innings of the warm-up match at the Grace Road in Leicester. Kohli was dismissed for 33 runs off 69 balls.

The Indian team won the toss and opted to bat first. Virat Kohli came to bat at his usual position of number four, after the dismissal of skipper Rohit Sharma. Kohli had a good partnership of 57 runs with wicket-keeper KS Bharat. However, in the forty-first over, Virat Kohli’s stay at the crease came to an end.

Roman Walker bowled a full-length delivery that swung away from Kohli. The ball clipped the pads before it went to Rishabh Pant, who is playing for Leicestershire in the game. Kohli was given LBW by the umpire, however, the Indian cricketer wasn’t happy with the decision.

Speaking about the dismissal, Roman Walker said, as quoted by India Today, “It was nice. You want to play against India when they come along. Surprised to take 5. It (Virat Kohli’s wicket) was a nice moment for me. A couple of my mates texted me saying there’s one for the grandkids.”

☝️ | Kohli (33) lbw Walker.@RomanWalker17 strikes again! This time he hits the pads of Kohli, and after a long wait the umpire's finger goes up.

Roman Walker finished the first innings with bowling figures of 5/56 in 11 overs at an economy rate of 2.2. Apart from Kohli, he dismissed Rohit Sharma, Ravindra Jadeja, Hanuma Vihari, and Shardul Thakur.

Indian pacers Jasprit Bumrah and Prasidh Krishna too are playing for Leicestershire in the ongoing warm-up match. Speaking about playing alongside the duo, Roman Walker said, “Yeah, they are great blokes. I mean, they talked to me almost every ball whenever there was room for a bit of advice. They have been really good with everybody, to be fair.”

Rishabh Pant is great fun to bat with: Roman Walker

Wicket-keeper batter Rishabh Pant slammed a brilliant 76 for Leicestershire off just 87 balls. His knock included 14 boundaries and a six and came at a strike rate of 87.36. He took Leicestershire to 244 runs, in reply to India’s 246 in the first innings.

Rishabh Pant stitched a 70-run partnership with Roman Walker at the crease. Walker scored 34 runs off 57 balls, including seven boundaries. He expressed that it was great fun to bat with the wicket-keeper batter. Roman Walker said,

“It was great, he (Pant) has been great with our boys. He is great fun to bat with. He smiles whenever he plays a rogue shot. If he gets away with it, he laughs, if he doesn’t, he laughs. It’s a great thing to learn from the other end. Just talking to him about options, how to play different bowlers, very valuable.”

In the second innings, India is 80/1 after 18 overs. They have a lead of 82 runs at the end of the second day’s play. KS Bharat is unbeaten on 31 runs, while Hanuma Vihari has scored 9* runs off 16 balls.