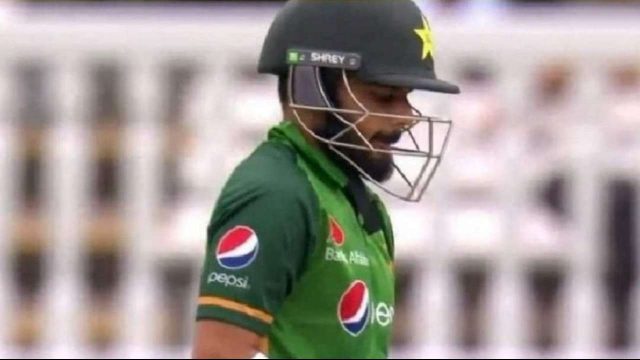 Pakistani batsman Saud Shakeel recently made his debut in the ongoing ODI series against England. He grabbed the headlines for a topic unrelated to his performance. Fans on Twitter pointed out the resemblance between Saud Shakeel and Indian skipper Virat Kohli.

In the second ODI between England and Pakistan, the former was rescued by a late surge of runs from their lower order. Lewis Gregory and Brydon Carse stitched a crucial 69-run eighth-wicket partnership. This allowed them to cross the 200-run mark and eventually reach a match-winning total.

Pakistan, in what has become the norm, got off to a terrible start. They had slipped to 36-3 while chasing a target of 248. Shakeel came in to bat with his team in such a precarious position. He dug in at one end and tried to rescue the team but it was not to be. Pakistan kept spiraling and despite Hasan Ali’s heroics, succumbed to a crushing 52-run defeat.

Shakeel had a decent outing nonetheless. After being dismissed for five in the first ODI, he gave a much better account of himself in the second. There were a few crisp shots in his measured knock of 56, studded with four boundaries. Since Pakistan’s middle-order is quite weak, a batsman like Shakeel could solve a few headaches.

Instead of his fifty, Saud Shakeel was trending on Twitter for his similarities in looks to Indian skipper Virat Kohli. There have been scenarios where Pakistani batsmen are compared to Kohli. However, those were based on their cricketing skills rather than looks. Shakeel on the other hand is gaining traction for his facial features and Twitterati was in their usual elements.

Here’s how Twitter reacted to the similarities between Saud Shakeel and Virat Kohli:

Every one is busy in watching football n no one noticed that kohli was playing for pakistan#Messi #PAKvENG #ENGvsPAK pic.twitter.com/iXeHxqLs5e

Now Pakistan has its own Kohli! pic.twitter.com/kxEYyiGNHx

Am i the only one who thinks that he (Saud Shakeel) looks like Virat Kohli?? 😅😅#PAKvsENG pic.twitter.com/CmnX454iLG

Aint saud shakeel looking like kohli from early days??
Within the helmet,,just look at his looks #ENGvPAK

Its time to compare Saud Shakeel with Virat Kohli#PAKvENG #ENGvPAK