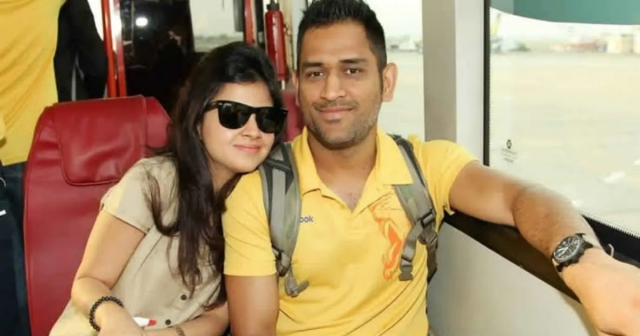 Mahendra Singh Dhoni’s wife Sakshi, has opened up about the challenges that cricketers’ wives have to go through in today’s times. MS and Sakshi tied the knot in 2010 and have a five-year-old daughter, Ziva. Sakshi is often seen in the stands, cheering for her husband.

“We are proud because they are where they are because they’ve been chosen out of billions of people and they are the in the game that people love, especially in India. General life changes when you get married and your husband goes to an office. But our husbands go to play sports. So I think you just have to adapt and change according to how they expect you to be and not just sort of stress them out,” she said.

You don’t have your private space: Sakshi Singh Dhoni

Further speaking about the challenges, that the cricketer’s wives face, Sakshi said that they don’t have any private space, as they are mostly in the public eye. She revealed that people tend to judge a cricketer’s wife more. Sakshi said,

“You don’t have your private space and you cannot be like how you are basically in front of cameras right now. Some people are comfortable in front of the camera, some people are not. And especially with the public, they tend to judge you, especially when you are a cricketer’s wife. Even when you are doing something like hanging out with friends and they do talk.”
Mahendra Singh Dhoni is in Surat for the Chennai Super Kings training camp, ahead of IPL 2022. The tournament will kick off on March 26, at the Wankhede Stadium.