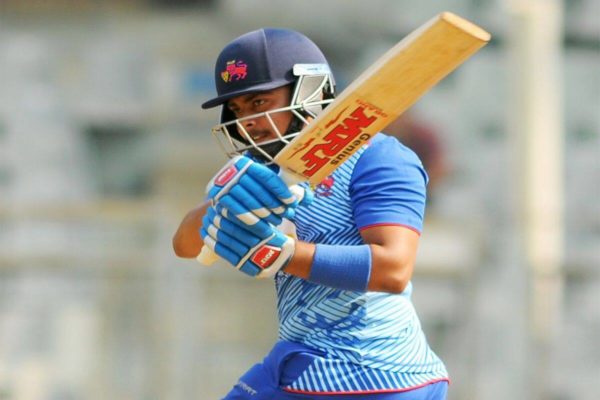 His outrageous knock included a total of 21 boundaries and 7 massive sixes. The Saurashtra bowling attack looked helpless against and inform Shaw as he scored runs all around the ground and finished the match with 8 overs to spare. Shaw continued his prolific form in the Vijay Hazare trophy as he now has a total of 589 runs in just 6 matches at an average of 196.3 and strike rate of 134.78.

Shaw in the tournament has made batting look easy and which is why fans on Twitter believe he will soon rule Indian cricket. It all started when he had scored an unbeaten 227 against Puducherry and fans on Twitter hailed him as the next Rohit Sharma. Shaw backed up his double century with yet another scintillating knock of 185* and took Mumbai to the semis.

Meanwhile, Shaw lost his place in the Indian side after he had a string of low scores. It now seems that the break did Shaw a world of good as he was able to make some adjustments in his batting which is now helping him score consistently. Twitter was buzzing after his captain’s knock and hailed his outstanding run with the bat in the competitive Vijay Hazare trophy.

Also Read: Watch-Hardik Pandya Smashes Huge Sixes In The Nets Ahead Of The 1st T20I

The talented future star of Indian cricket will now be setting sights on the upcoming IPL 2021 season where he will be representing the Delhi Capitals. If Shaw has a good IPL season he will again be in contention for India’s white-ball squad for the upcoming series. Nevertheless here’s how Twitter reacted after Prithvi Shaw scored 185* in the quarter-final against Saurashtra.

Prithvi shaw is back on the way to rule Indian cricket. Hail my student Prithvi . #PrithviShaw #Dravidians pic.twitter.com/lPShWrimHP

Prithvi Shaw's 185* in just 123 balls is now the highest individual score by an Indian in List A matches chase. Shaw today surpassed MS Dhoni's 183* against Sri Lanka in 2005 and Virat Kohli's 183 against Pakistan in 2012.

Prithvi Shaw has scored a century and going strong at a mind-boggling SR. That’s the way you need to bat as an opener in the modern day game in the limited overs’ game #VijayHazareTrophy

Is it about Prithvi Shaw smashing runs for fun in domestic cricket or correcting the minor flaws that were left exposed in international cricket?

A total of 589 runs in 6 matches at an average of 196.33 in #VijayHazareTrophy is a herculean effort.

Prithvi Shaw seems to have changed his approach. From bang bang bang to controlled hitting.