In India, unlike any other sport, cricket is worshipped as a religion. While the pressure for the cricketers of living up to the expectations is huge, their loved ones play a vital role in their journey. Wives of some players even sacrifice their profession to support their spouses.

In this article, we will take a look at the professions of wives of fifteen Indian cricketers before marriage.

Sakshi Singh Rawat is the wife of former India skipper Mahendra Singh Dhoni. She is often seen cheering for her husband at the stadium during matches.

Before marriage, Sakshi completed her Hotel management course in Kolkata and worked as a trainee at the Taj Bengal, Kolkata. This is where she first met MS Dhoni. The couple got married back in 2010 and has a daughter named Ziva Singh Dhoni. Sakshi is very active on social media and generally posts pictures and videos of the three.

Ritika Sajdeh is a sports manager. She previously worked at Cornerstone Sport & Entertainment, a management company owned by her cousin Bunty Sajdeh. Ritika used to look after the players and their brand endorsements and contracts.

She met Rohit Sharma during an advertisement shoot, after which they started dating. Rohit proposed Ritika at the Borivali Sports Complex in Mumbai, the ground where his cricketing career began. The couple tied the knot in 2015. Ritika continues to manage Rohit’s Sharma professional contracts. In 2018, she gave birth to their daughter, Samaira Sharma.

Dipika Pallikal is an Indian Squash Player. She is the first Indian to break into the top 10 in the PSA women’s ranking. She won a gold medal at the 2014 Commonwealth games alongside her partner Joshna Chinnappa.

Dipika also became the first Female squash player to be rewarded with the Arjuna Award. She was honored with the Padma Shri award in 2014. Dipika married Indian wicket-keeper batsman Dinesh Karthik in August 2015.

Jasprit Bumrah recently got married to Sanjana Ganesan in March 2021 at a private ceremony in Goa. Sanjana is a sports presenter and a TV Host. She began her career as a model.

Sanjana was the sports presenter for the Women’s T20 World Cup in 2020 and also for the Indian Premier League. She was also the official anchor of Kolkata Knight Riders’ special show ‘The Knight Club’.

Sheetal Goutham is a former professional Tennis Player. She started playing tennis at the age of 9 in Bangalore with her brother Arjun Goutham.

Geeta Basra is a British-born Indian film actress. She studied acting at the Kishore Namit Kapoor Acting Institute. Geeta made her debut in Bollywood alongside Emraan Hashmi in the movie “Dil Diya Hai”.

She was also seen in movies like The Train, Zilla Ghaziabad, Second Hand Husband etc. Geeta married Harbhajan Singh in 2015. They have a daughter Hinaya Heer Plaha and a son.

Priyanka Chaudhary worked as an IT professional for ING in the Bijlmer neighborhood of Amsterdam, the Netherlands. She married her childhood friend and Indian Cricketer Suresh Raina back in 2015. The couple has a daughter, Gracia, and a son, Rio.

Anjali Tendulkar is the wife of Cricketing Legend and The God of cricket, Sachin Tendulkar. She is a pediatrician by her profession. She studied medicine at Grant Medical College and practiced as a pediatrician at Mumbai’s JJ Hospital.

Anjali married Sachin in 1995. They welcomed their daughter, Sara on 12 October 1997 and son Arjun on 4 September 1999. Anjali gave her well built and promising medical career to look after her husband and kids.

Nataša Stanković is a Serbian dancer, model, and actress. In 2012, she moved to India to pursue a career in acting and was a model for the brand Johnson & Johnson.

Nataša made her Hindi film debut with the film Satyagraha. Since then, she has worked in 7 Hours To Go, Fukrey Returns, and Zero. In 2014, she participated in Big Boss. Nataša got married to Hardik Pandya in 2020 and the couple has a son, Agastya.

Anushka Sharma is an Indian actress and film producer, who has featured in several Bollywood movies. She made her debut opposite Shah Rukh Khan in Rab Ne Bana Di Jodi. Anushka is the co-founder of the production company Clean Slate Filmz. She has designed her own line of clothing for women, named Nush.

Anushka Sharma married Virat Kohli in Italy, in 2017. In 2020, the couple was blessed with a baby girl, Vamika.

Safa Baig is the wife of  Indian fast bowler and left-handed batsman, Irfan Pathan. She is a model by her profession. Apart from modeling, Safa was also a journalist and has worked as an executive editor at a PR firm.

Safa Baig and Irfan Pathan got married in 2016. They have a son named Imran Pathan. 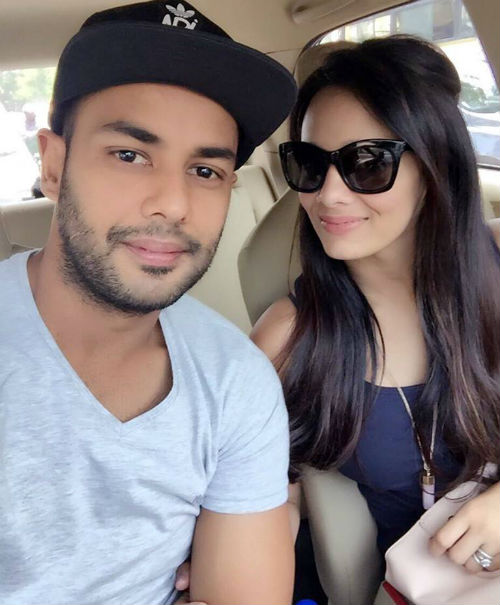 Mayanti Langer is married to India cricketer Stuart Binny. She is a successful Indian Journalist who is currently associated with STAR.

Mayanti was a host in the 2010 FIFA WORLD CUP broadcast in India. She has also hosted the 2015 world Cup for Star Sports. Along with this, Mayanti has hosted tournaments like Football Cafe on Zee Sports, 2010 Commonwealth Games, 2011 cricket world cup, 2014 Indian Super League, and a lot more.

Hazel Keech is a British-Mauritian model. She has worked in several advertisement campaigns and movies. In 2005, she decided to pursue a modeling and acting career in India. She played a supporting role in the movie Bodyguard.

Hazel also participated in the 2013 Big Boss season. Hazel and Yuvraj Singh got married on 30 November 2016, after which she adopted the name “Gurbasant Kaur”.

Sagarika Ghatge got married to Indian cricketer Zaheer Khan in 2017. Sagarika is an Indian model as well as a national-level hockey player. She is best known for he role in Chak De India as Preeti Sabharwal. She has appeared in various fashion magazines and shows.

In 2015, she participated in Khatron Ke Khiladi and emerged as a finalist. She has worked in movies like Rush, Premachi Goshta, Miley naa Miley hum, etc.

Dona took her lessons from Kelucharan Mohapatra. She started learning dancing since she was 3 years old and has done many dance shows across the country. Dona even has her own dancing Institute named “Diksha Manjari” which has a capacity of more than 2000 students.

“He Brings A Bit Of Mystery” – Wasim Jaffer Feels Kuldeep Yadav Should Replace...

“He Brings A Bit Of Mystery” – Wasim Jaffer Feels Kuldeep...