Prior to this season, Chennai Super Kings were the only franchise in the history of the Indian Premier League to have played in the playoffs of all seasons till date. But this season the story has been different, the Chennai based franchise which is led by former India skipper MS Dhoni has managed to win just three games this seasons.

Moreover, they’re lying last in the points table which really isn’t the place Chennai are used to when it comes to the standings in the points table. The likes of Shane Watson, Faf Du Plessis, Ambati Rayudu have performed but they haven’t been consistent enough to sail their side to consistent victories this season.

Also, the question of intent has also come into play with the likes Ambati Rayudu and Kedar Jadhav not batting with the right intent this season. By all sorts, Chennai Super Kings have struggled to replicate the success they’ve had in the last 10 seasons of the Indian Premier League.

Very recently, Ravindra Jadeja Posted an inspiring post on his Instagram Story which said, “We can win, We Must Win, We Will Win“.

The post clearly indicates the side’s poor performance this season which is why Ravindra Jadeja wants to motivate his side so that they go on to win a few matches this season.

Though it is unlikely that Chennai Super Kings will qualify for the playoffs, the minimum the franchise can do is play for their integrity and win as many matches remaining in the league stages to sign off the tournament on a high. 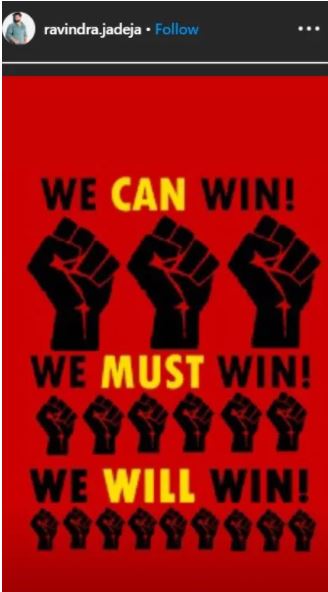