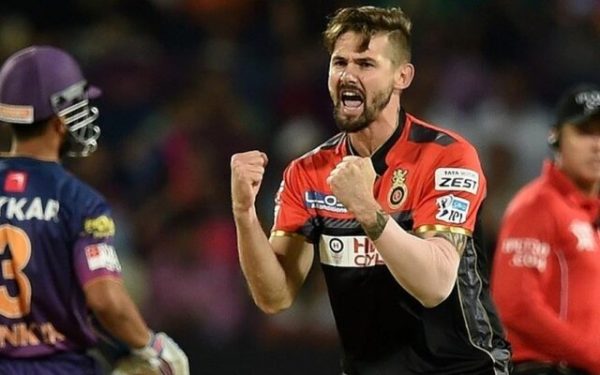 Royal Challengers Bangalore cricketers Kane Richardson and Adam Zampa will no longer be a part of IPL 2021; the franchise said in a statement. The Australian duo will now return to the country citing personal reasons as more and more cricketers pull out of the cash-rich league amid the prevailing COVID-19 scare in India.

Incidentally, Richardson and Zampa are the second and third Australians to leave the IPL following Andrew Tye’s departure from Rajasthan Royals on April 25 (Sunday). Tye flew back to Australia with the fear of not being able to return home as India witnessed a massive upsurge in the COVID-19 cases over the past two weeks.

Adam Zampa has not featured in a single game for RCB in the ongoing season while Kane Richardson played only one game against Rajasthan Royals where he picked a solitary wicket. Royal Challengers Bangalore issued a statement in support of their decision as the Aussie duo fly back to their country.

“Adam Zampa & Kane Richardson are returning to Australia for personal reasons and will be unavailable for the remainder of #IPL2021. Royal Challengers Bangalore management respects their decision and offers them complete support,” RCB said in a statement.

Adam Zampa & Kane Richardson are returning to Australia for personal reasons and will be unavailable for the remainder of #IPL2021. Royal Challengers Bangalore management respects their decision and offers them complete support.#PlayBold #WeAreChallengers pic.twitter.com/NfzIOW5Pwl

RCB succumb to their first defeat of IPL 2021

Meanwhile, ater four consecutive victories, Bangalore’s winning juggernaut finally was halted by the Super Kings. Ravindra Jadeja was on fire with bat, ball, and on the ground to take the game home. He struck 37 runs in the 20th overs off Harshal Patel – the most runs conceded by a bowler in IPL, to propel Chennai to 191 runs from nowhere. Jadeja remained unbeaten on 62 runs from 28 deliveries while Faf du Plessis chipped in with a timely half-century at the top-order.

Chasing a mammoth total, Dedvutt Padikkal got Virat Kohli & Co off to a flying start. In-form Glenn Maxwell also got off with a couple of boundaries but Ravindra Jadeja was too hot to handle for him. The left-armer got to turn on this spin-friendly pitch and knocked the leg stump out. AB de Villiers was completely bamboozled by Jadeja’s spin to put CSK right on top. Jadeja fired a bullet throw too to round off his contributions in all aspects of the game to hand Royal Challengers Bangalore their first defeat of the season.