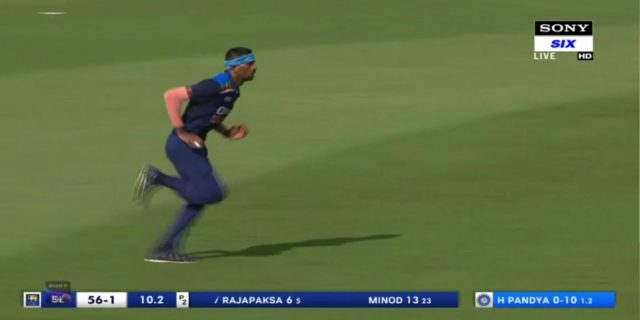 Star Indian fast-bowling all-rounder Hardik Pandya is known for his trendy looks on the field. In the first ODI match of India tour of Sri Lanka at R. Premadasa Stadium Colombo, Hardik was seen with a new look. In the match, Pandya was seen wearing the headband while bowling the spells for the team.

Notably, recently Hardik shaped himself into a complete batsman after being unable to bowl the spells. Also, After a long time took he the role of a complete all-rounder in the team.

The 27-year-old’s new look grabbed the attention of fans and followers on social media. Cricket lovers showed a mixed reaction towards Hardik wearing a headband. When the newly-appointed skipper Shikhar Dhawan called Hardik to join the bowling attack, the all-rounder was seen wearing a headband.

The new-look of Indian all-rounder became the talk of the town. Even England pacer loved the new look of Hardik Pandya. Stuart broad wrote “Love it @hardikpandya7,” on Twitter.

Here is how Twitterati’s reacted to Hardik Pandya’s new look:

Hardik Pandya seems to be having a Caribbean flavor about him 😉🙂

The 27-year-old bowled last time for India in the England series. The pace All-rounder bowled in the third ODI of the England tour of the India series. He didn’t have a great outing as he conceded 48 runs in 9 overs. Also in the IPL 2021 Pandya didn’t bowl for Rohit Sharma-led Mumbai Indians. The Sri Lanka series was the first time fans saw Hardik as the bowler.

In bowling return, Hardik Pandya got the chance to bowl 5 overs for the team. He looked good and comfortable while bowling. The younger Pandya also picked a crucial wicket of Isuru Udana in the 47th over of the game.

However, Pandya turned out to be the most expensive bowler from the Indian side in a low-scoring encounter. On one side Krunal Pandya has 26 runs in 10 overs, on the other side Hardik gave 34 runs in just five over as Sri Lanka posted 262 runs on the board.

It was a cakewalk for India in the run chase. Skipper Shikhar Dhawan anchored the innings after Prithvi Shaw and Ishan Kishan ran riots in the first powerplay.