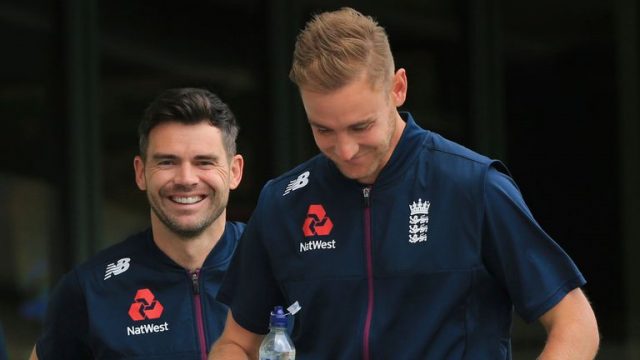 The England Cricket Team will be playing a three-match One-Day International series against Pakistan, starting from July 8. The England Cricket Board will name an entirely new squad after a major Covid-19 outbreak within the team.

Three players and four support staff members have tested positive for the virus, while the rest of the squad is under isolation as they were deemed close contacts. Despite this, the ECB has decided to go ahead with the series against Pakistan.

The ECB can confirm that seven members of the England Men's ODI party have tested positive for COVID-19.

He tagged his teammate James Anderson and asked, “Still got your ODI cap @jimmy9?!”.

James Anderson shared a gif to reply to Broad’s question.

Both Anderson and Broad have been out of the England ODI squad for a long time. With England about to name a whole new squad, the duo will be hopeful of an ODI return.

The England Cricket Board will soon announce the squad for the Pakistan series. However, they have confirmed that Ben Stokes will lead the team.

Ben Stokes will play his first international match after recovering from injury. He fractured his left index finger while playing for the Rajasthan Royals. Recently, the all-rounder was playing for his county team Durham to prove match fitness.

‘‘We have been mindful that the emergence of the Delta variant, along with our move away from the stringent enforcement of bio secure environments, could increase the chances of an outbreak. We made a strategic choice to try to adapt protocols, in order to support the overall wellbeing of our players and management staff who have spent much of the last 14 months living in very restricted conditions.”