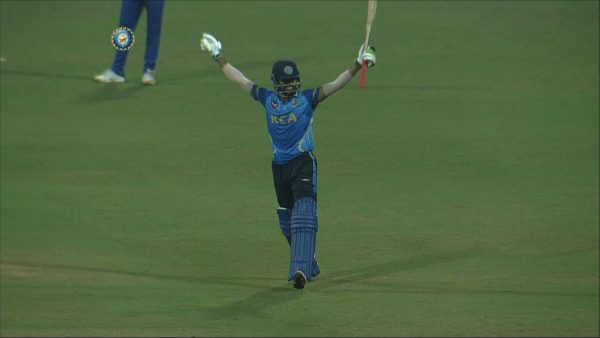 The young batsman from Kerala Mohammad Azharuddeen has set social media on fire with his 37-ball century against Mumbai in the ongoing Syed Mushtaq Ali Trophy. Kerala rode on to his brilliant match-winning knock to chase down 197 runs set by Suryakumar Yadav & Co batting first at the Wankhede Stadium.

At the halfway mark it looked like a mammoth task to chase down 197 runs but the 26-year-old wicket-keeper batsman had different things in his mind. He went all guns blazing from the first delivery and took on Tushar Deshpande from the second over shelling out 55 runs off his three overs.

He smacked everything that came his way while senior custodian Robin Uthappa played the second riddle on the other end. By the time Uthappa fell lbw to left-arm spinner Shams Mulani, the game had slipped away from Mumbai. Captain Sanju Samson joined Mohammad Azharuddeen but was caught behind off Tushar Deshpande when just seven runs were required.

Fittingly, Azharuddeen played the winning shot, a huge six over mid-wicket off Siddhesh Lad. His knock included 11 sixes and nine boundaries remained unbeaten on 137 runs from 54 deliveries which made him the first batsman to score a century for Kerala in the Syed Mushtaq Ali Trophy.

Twitter went berserk as soon as Mohammad Azharuddeen completed the mammoth heist at the Wankhede Stadium where his namesake and former India captain Mohammad Azharuddin has won many games for India. From Virender Sehwag to Harsha Bhogle, everyone spoke highly of the young talent.

Meanwhile, the franchises will have their eyes glued to the TV sets with IPL 2021 auction scheduled to take place in less than a month’s time. And Mohammad Azharuddeen might have just bagged an IPL deal with his century-run knock against Mumbai.

To score like that against Mumbai was some effort. 137* of 54 and finishing the job on hand. Enjoyed this innings.#SyedMushtaqAliT20 pic.twitter.com/VrQk5v8PPB

I had seen an extraordinary player called Mohd Azharuddin many years ago. Now I am seeing another by the same name. Wow, he can play some shots!

What a story. A player named after one Indian cricketer, Azhar, is joined by a player named after another Indian legend, Sachin, to deliver an 8 wicket win for Kerala against the most successful domestic side ever, Mumbai, in the Mushtaq Ali T20 tournament! pic.twitter.com/QQjViQbo1K

In my teens, Mohammad Azharuddin held the world record for the fastest century in ODIs, off 62 balls.

Today Mohammad Azharuddeen gets one in 37.

Mohammad Azharuddeen's 137 not out off only 54 balls was a proper computer-game like innings! Felt as if he was batting on PS4 or on EA Cricket'07 #SyedMushtaqAliT20 #SyedMushtaqAliTrophy2021 #MUMvsKER

I never heard of this Mohammad Azharuddeen until yesterday. But then, so haven't so many others.