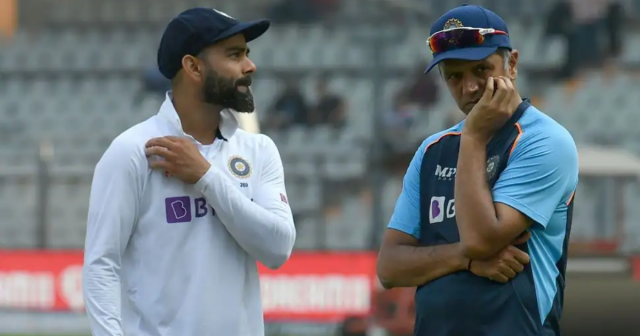 Virat Kohli has shocked the cricket world by announcing his resignation as India’s Test captain. This came as a shock to the fans and the entire cricketing community, since India’s Test record under Virat Kohli is unmatched.

According to Times Now, Virat notified head coach Rahul Dravid of his decision in the morning and contacted BCCI secretary Jay Shah on Saturday afternoon. According to sources, Kohli conducted a team meeting hours after India’s Test series loss to South Africa and finished it with this revelation. The Indian Express reported a member of that meeting as saying that Kohli said:

“I ask a small favour, please don’t share with anybody outside the dressing room.”

According to another report published by Aajtak, Kohli had a lengthy discussion with Rahul Dravid after the Capetown Test. Kohli informed him of his plan to step down as Test captain without informing the rest of the squad.

After quitting the T20I captaincy in September and being ousted as the ODI captain in December 2021, Kohli was expected to continue the Test leadership for a long time. But the 33-year old had other plans.

When MS Dhoni stepped down as Test captain during the 2014 Australia tour, Virat Kohli was given the leadership role. At the time, India was ranked seventh in Test cricket. Virat Kohli deserves a lot of credit for guiding the Indian Test team to a position where they are now consistently ranked first in the world.

Congratulations to @imVkohli on a tremendous tenure as #TeamIndia captain. Virat turned the team into a ruthless fit unit that performed admirably both in India and away. The Test wins in Australia & England have been special. https://t.co/9Usle3MbbQ

Sourav Ganguly, the BCCI President, took to microblogging site Twitter to confirm that the decision is Virat’s own choice. Ganguly stated that the Indian team has achieved significant progress across all forms under Virat’s captaincy.

Under Virats leadership Indian cricket has made rapid strides in all formats of the game ..his decision is a personal one and bcci respects it immensely ..he will be an important member to take this team to newer heights in the future.A great player.well done ..@BCCI @imVkohli

Kohli exits as India’s most successful Test captain, with 40 victories from 68 games. He has a 13-win advantage over MS Dhoni. Vice-captain Rohit Sharma or KL Rahul, who led the side in the second Test against South Africa, are expected to replace Kohli.