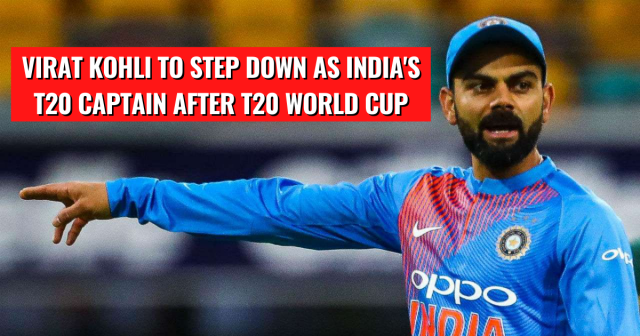 Indian skipper Virat Kohli has decided to step down as India’s T20I skipper after the T20 World Cup 2021. The tournament will be played in UAE and Oman between October 17-November 14. He is yet to win an ICC title having led the side in three ICC events.

He took to Twitter to confirm his decision. In a statement, he spoke about his journey as India’s T20I skipper and announced his decision to step down as the skipper post the marquee event.

Virat Kohli will be leading a group of players who all are hungry to win an ICC title ad seems the upcoming event as a big opportunity. Rohit Sharma and Virat Kohli are two of the seniormost players in the Indian squad at the moment and Rohit Sharma presumably will be appointed as the next T20I skipper of the team.

A few days ago, BCCI Secretary Jay Shah said that they are backing Virat Kohli to lead the team in all formats and within a couple of days Virat has come up with this big statemen.

“There is no such proposal and the team is led by Virat and we are backing him,” Shah said. BCCI Treasurer Arun Dhumal had also rubbished such claims earlier.

Both Rohit and Kohli will be the point of focus in the upcoming T20 World Cup and Kohli’s leadership will be closely monitored in the tournament as well. The Indian squad has talented players to help Kohli won his first major ICC title as captain.

The second half of the IPL 2021 will be a crucial phase for Virat Kohli. He has never won an ICC title as captain and how he leads his team will be a big indication on his mindset of leading the Indian team in the ICC event.

India begin their T20 World Cup campaign against Pakistan on October 24. He will have the added pressure of maintaining India’s consistent winning record against Pakistan in ICC tournaments.