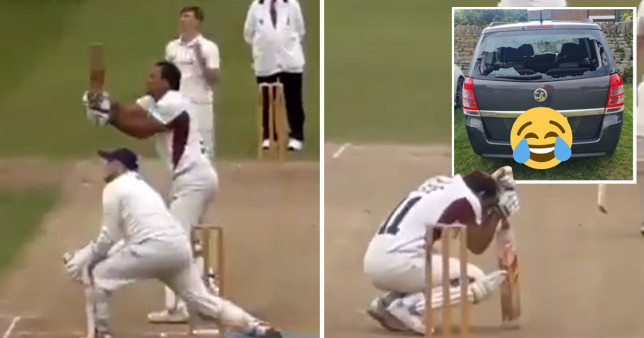 Cricket is filled with different kinds of emotions, some moments fill fans with happiness and joy, and on the contrary, few moments make them brutally emotional. One six by a cricketer can result in a victory of one team giving joy to their fans and on the other side making sad to the losing team fans.

A rare moment happened in the match between Illingworth St Mary’s and Sowerby’s St Peter’s in the Crossley Shield quarter-final. Where a batsman Asif Ali hitting a six didn’t give him joy but made everyone around him including fans and players laugh hard.

Cricketer Asif Ali hit a spectacular six when Illingworth was at a score of 137/5. Asif cherished the moment while hitting the six until the ball went and smashed his car windscreen. Asif was seen very sad at that moment instantly putting his hand on his head and went on his knees, giving everyone around him big laughter.

To make everything even worse, Ali was left stranded on 43 not out as Illingworth was defeated by Crossley Shield’s quarter-final match against Sowerby St Peters in the Halifax Cricket League.

🔊 Sound on to hear the smash 💥 pic.twitter.com/FNjRMic9U5

Also Read: Top 10 Captains In The History Of IPL

Illingworth’s tweet of the incident has gone viral alongside a picture of Asif’s Vauxhall Zafira. Fans trolled the batsman by calling it his mistake and saying things like he should get few extra runs for that short.

An identical event had transpired in August 2020, when one of eight sixes by former Ireland all-rounder Kevin O’Brien sailed into the parking to shatter his car’s rear window.

“It later transpired that one of O’Brien’s sixes smashed a car window in the adjacent car park – his own,”  “Despite having a superb day with the bat, O’Brien will unfortunately face a windy car ride home after causing this damage to his own vehicle.” Cricket Ireland said in a report.