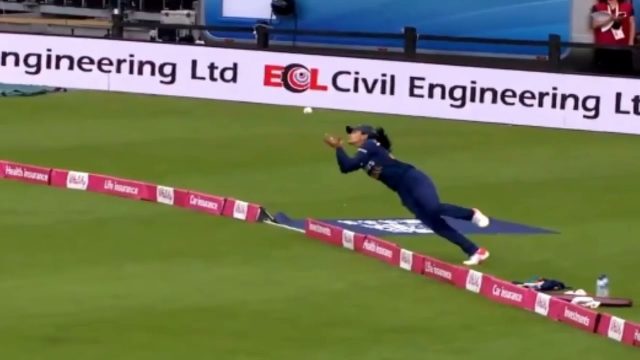 The first T20 International between India and England was a disappointing affair marred by rain. But Harleen Deol’s brilliance on the boundary ropes was the magic moment that caught everyone’s eye.

In the 19th over of the Match, Amy Jones who was well set on 43 was looking to go all guns blazing. She tried to take on Shikha Pandey but was caught by Harleen, who took an absolute stunner. Harleen was standing at the long-off boundary to save maximums. She jumped to catch the ball but just when the momentum took her over the ropes, she threw the ball back in the nick of time, thanks to her presence of mind.

Harleen Deol then dived back in to complete the catch. England opener Danielle Wyatt too couldn’t stop herself from acknowledging Harleen Deol’s brilliance.

No Way Harleen Deol, You Cannot Do That 🤯

That catch by Harleen 🔥🔥

A Catch for the ages, Harleen Deol. pic.twitter.com/KdfEc1yOQ9

As good a catch one will ever see on a cricket field, from Harleen Deol. Absolutely top class. https://t.co/CKmB3uZ7OH

At this rate I feel I am going to spend the entire day watching the replay of Harleen's catch and showing it to everyone I come in contact with.

England wins by 18 runs on the DLS method

On the back of Sciver and Jones’ performance, England reached 177/7 at the end of the first innings. Shikha Pandey was the pick of the bowlers for India with 3 wickets at an economy rate of 5.5 in her full quota of four overs.

The Indian chase was dealt with an early blow. Shafali Verma got out for nothing on the second delivery of the innings by Katherine Brunt. Smriti Mandhana scored a quick 29 before Ecclestone caught her off Sciver. Harmanpreet Kaur too was sent back to the pavilion early.

Harleen Deol and Deepti Sharma were at the crease, but rain interrupted the match and it had to be called off. England was declared winners at they were 18 ahead on DLS.