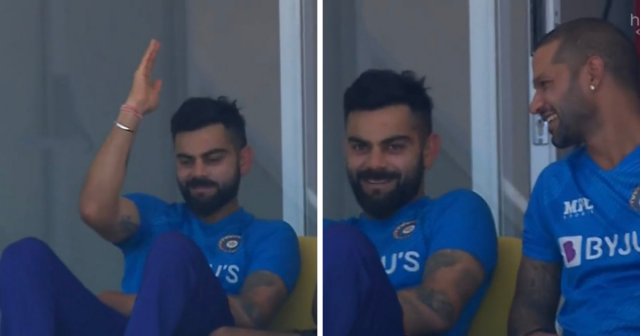 The 2nd ODI between South Africa and India is underway in Paarl. The stakes to win an ODI match have never been higher for India, in the recent past. After the disappointing performance in the Test series and an average outing in the first ODI, they have all to play for in this match.

The pressure has been high on the team, and the soaring temperatures at the ground have not helped matters. The usually calm and composed KL Rahul losing his cool on Rishabh Pant after a mix-up between the wickets just went on to show that the players are right on the edge.

Amidst all that tension on the pitch, Virat Kohli was seen to be having a good time watching the game from the dressing room. Rishabh Pant entertained one and all with his explosive batting. He set up a spectacle for everyone to cherish.

During his blistering innings, he played a beautiful lofted shot for a boundary over the mid-off fielder. As the cameras panned to the Indian dugout immediately after the shot, Kohli was seen producing some hilarious dance moves, impressed with Pant’s hitting ability.

Kohli enjoying the shot despite getting out for a duck in the game just goes on to show the kind of team player he is, enjoying the success of his teammates and continuing to give his best to the team, even after being sacked from the captaincy.

Kohli’s moves were well enjoyed by his plethora of fans, many of whom envied Shikhar Dhawan, who was sitting right next to him and enjoyed Kohli’s celebration with a wry smile. The Indian fans would hope that they get to see more such celebrations after a win for India later in the day so that the team can remain alive in the series.

Virat kohli is such a mood 🤣✨ pic.twitter.com/yjC6XTlJIw

[Watch] Harmanpreet Kaur And Others Burst Into Laughter As Yastika Bhatia...