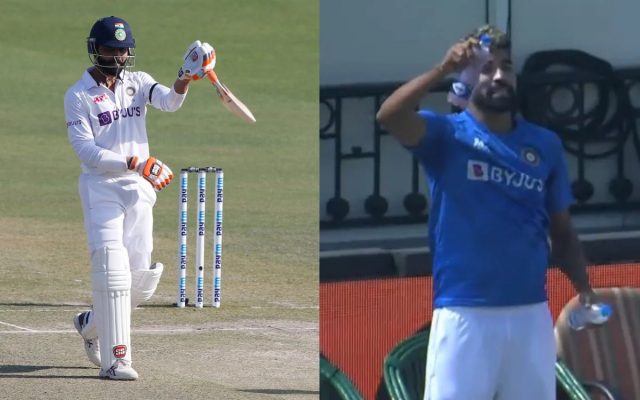 India pacer Mohammed Siraj was spotted imitating Ravindra Jadeja’s sword celebration after the all-rounder reached his century in the 1st Test against Sri Lanka in Mohali. The celebrated all-rounder continued the onslaught as he propelled India to 500+ runs in the first innings.

Meanwhile, Jadeja takes immense pride to be a Rajput and unleash the sword celebration every time he scores a fifty or a hundred. The all-rounder from Saurashtra brought out his famous sword celebration after reaching his 2nd Test century in Mohali.

As soon as Jadeja began the sword celebration, Mohammad Siraj, who was not included in the playing XI, began imitating him with a bottle in his hand.

Ravindra Jadeja was also spotted kissing his helmet and touched the black armband, remembering legendary spinner Shane Warne, who breathed his last yesterday (March 4) at the age of 52 years.

Incidentally, Warne was one of the early cricketers who spotted Jadeja’s talent while both spent time together in Rajasthan Royals during IPL 2008. Calling Ravindra Jadeja a ‘rockstar’, the legendary spinner stated that he was destined for big things.

Incidentally, Ravindra Jadeja began the day batting on 45, with Ravichandran Ashwin at the other end. He was quick to cross the 50-run mark as he and Ashwin stitched together a useful partnership.

As Jadeja closed in on his century, Ashwin fell for 61 off 82 deliveries, caught behind off Suranga Lakmal‘s bowling. It brought to an end a well-made 130-run stand between the two all-rounders.

However, Jadeja soon brought up his second Test century. India lost another wicket when Vishwa Fernando had Jayant Yadav nick one to Lahiru Thirimanne in the slips.

Ravindra Jadeja kept up the scoring rate to take India over the 500-run mark.