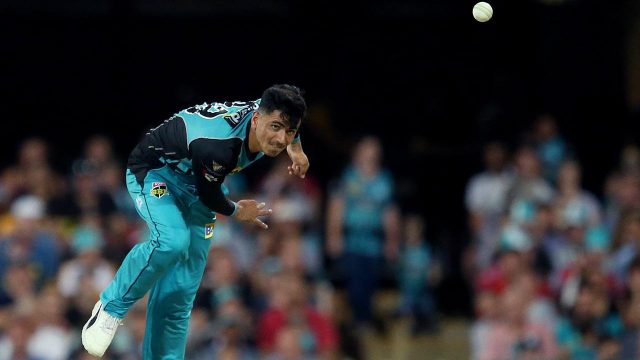 Chasing 151 runs, Hobart never really got going in the run chase losing wickets at regular intervals. Xavier Bartlett gave the early breakthroughs for Brisbane Heats, picking up the first three wickets that fell before Mujeeb ur Rahman joined the party.

The Afghan spinner dismissed Harry Brook and Peter Handscomb before cleaning up Jordan Thompson. Mujeeb plucked out a mystery off his sleeves. Thompson looked to defend and the batter wasn’t sure what was coming.

He hung his bat out in hope but this carrom ball spun back in to hit the top of the off-stump.

One of the commentators was in awe of the dismissal, “Ah, that’s clever. Too good, too clever, too skilfull. Mujeeb, he is a magician.”

But soon it was found that the commentators themselves weren’t able to decipher Mujeeb’s delivery. “Oh no, I’m not sure what it’s done,” said Michael Vaughan upon seeing the first slo-mo replay. In the next replay, which was a close-up of Mujeeb’s bowling hand, they were able to figure out it was a carrom ball.

Hobart Hurricanes never managed to recover from the loss of wickets in the cluster as they could only manage 136 runs from their stipulated 20 overs, falling short by 14 runs.