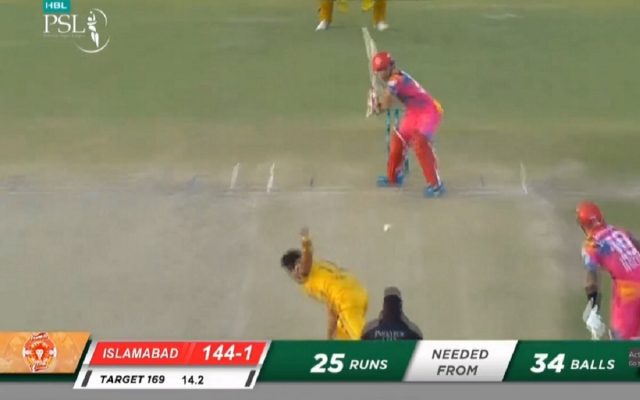 Rahmatullah Gurbaz produced an MS Dhoni-Esque helicopter shot during his side Islamabad United’s game against Peshawar Zalmi in the ongoing Pakistan Super League (PSL). Islamabad begin their PSL 2022 campaign with a nine-wicket win.

Chasing 169 runs, Islamabad were well-placed in the run chase with 27 runs required in the last six overs to start their PSL 2022 campaign on a winning note. Rahmatullah Gurbaz took a couple of singles to begin the over off Sohail Khan before producing the elegant-looking helicopter shot.

Sohail bowled a fullish delivery on the stumps and Gurbaz brought out the helicopter with a full swing of the bat in the air as the ball went out of the park. The shot impressed the commentators and the fans and the video of the 20-year-old has gone viral on social media.

whats up with afghanistan and the helicopter pic.twitter.com/kdyLmXAd1P

Rahmatullah Gurbaz followed it up with a six and a four as the equation came down to United needing just 11 runs and they chased down the total with 25 balls to spare. The Afghanistan cricketer remained unbeaten on 27 runs from 16 deliveries.

Incidentally, Paul Stirling and Alex Hales set the tone for Islamabad United with a 112-run stand for the first wicket in just 9.1 overs. Stirling smacked 57 off just 25 deliveries including seven boundaries and three sixes before getting out that paved the way for Rahmatullah Gurbaz.

Alex Hales, on the other hand, remained unbeaten on 82 runs from 54 balls which included 13 fours and one towering six.