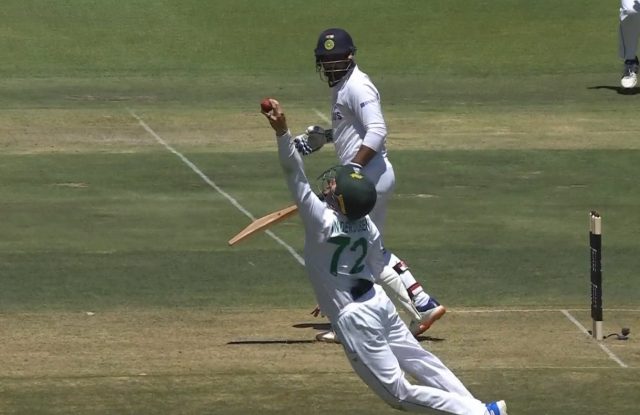 Vihari, who has been waiting in the fringes, came into the playing XI in place of Virat Kohli, who missed out with an upper back spasm. South Africa made a swift comeback with a couple of wickets after India got off to a fine start after KL Rahul opted to bat first.

In walked Hanuma Vihari, who showed great application during his 53-ball vigil. Apart from the dropped chance from Temba Bavuma, the batter from Andhra played a patient innings before Rassie van der Dussen produced an unexpected effort in the forward short leg.

It was a short and quick delivery from Kagiso Rabada targetted at Hanuma Vihari’s ribs, who tried to fend it away and ended up getting an inside edge that lobs towards short leg. Rassie van der Dussen jumped to his left, stuck his left hand out and grabbed a blinder of a catch.

With the dismissal of Hanuma Vihari, India were reduced to 91/4 with stand-in captain KL Rahul fighting single-handedly from one end.

KL Rahul has been India’s highest run-scorer in the ongoing series so far, once again steadied the ship for the visiting side, who lost Ajinkya Rahane and Cheteshwar Pujara in two consecutive balls.

He once again played a fine knock of 50 to bail India out of danger. However, he perished soon after in an attempt to play a pull shot of Marco Jansen.

India are currently reeling at 116/5 with Rishabh Pant and Ravichandran Ashwin in the middle.