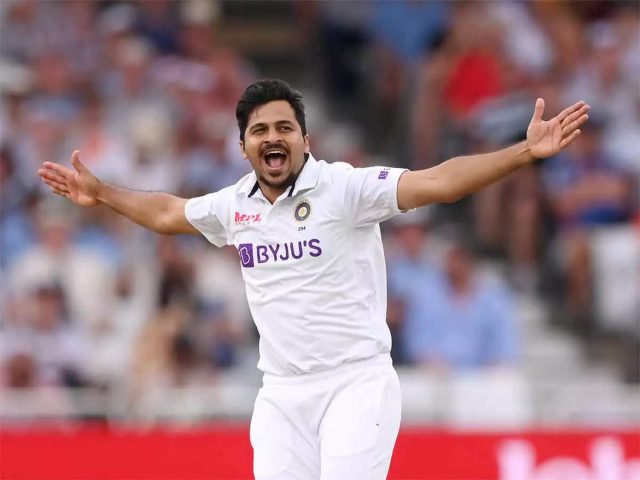 Team India’s bowling all-rounder Shardul Thakur was not happy with South African batter, Temba Bavuma, on Day 4 of the second Test in Johannesburg which led to verbal abuse from Thakur.

This incident happened when while taking guard, Bavuma pulled out at the end moment. Just two balls later, Bavuma did the same thing again as there was some disturbance near the sightscreen which troubled Bavuma but Shardul Thakur let out his frustration as well.

Thakur was heard in the stump mic saying Temba “What the F**k”. And, he got a warning from the umpire Allahudien Paleker.

As far as Thakur’s recent success is concerned, he has made headlines with his stunning spell in Johannesburg. He received a lot of praises from the cricketing fraternity, including the batting maestro Sachin Tendulkar.

Shardul Thakur claimed his career-best figures of 7 for 61 on Day 2 of the ongoing second Test against South Africa on Tuesday as well. And, on the back of his stunning show, the Proteas were bowled out for 229 in response to India’s first-innings total of 202 as well.

Tendulkar lauded the 30-year-old’s bowling performance. Taking to Twitter, Tendulkar wrote: “Congratulations to @imShard on picking up 7 wickets with his steady bowling and variations. Good support by the others.”

Congratulations to @imShard on picking up 7 wickets with his steady bowling and variations. Good support by the others.#SAvIND

Meanwhile, Dean Elgar scored an unbeaten 96 as South Africa levelled the 3-match series 1-1. The final Test will take place in Cape Town where both teams have a chance to win the series and earn important World Test Championship (WTC) points.

For the next match, regular Test captain Virat Kohli is expected to return and his guidance and presence will bring the much-needed change to the team. And, it will be interesting to see if they manage to win the series and script history as well.