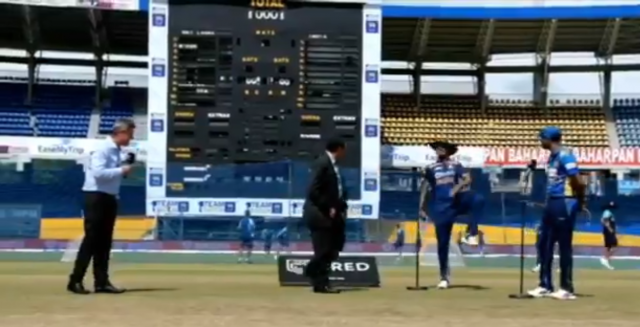 Team India captain Shikhar Dhawan did his trademark ‘thigh-five’ after winning the toss in the third ODI against Sri Lanka. This was Dhawan’s first toss win as a captain and he didn’t hold back his excitement on the field.

After winning the first two games, India goes into the third ODI with an edge over the hosts. Different players chipped in at tough times which has kept India on top in the series. The first match saw Ishan Kishan blaze to a fifty on debut while Deepak Chahar scored an unbeaten 69 in the second to secure victory for India.

The third one might be a dead rubber but there are Super League points at stake. During the toss in the third game, Shikhar Dhawan did his trademark celebration ‘thigh-five’ after winning the coin flip. In recent times, team India has rarely won tosses and Dhawan’s elation was on display.

#TeamIndia have won the toss and they will bat first #SLvIND pic.twitter.com/51qWQOtePK

Team India has made massive changes to the team for the third ODI against Sri Lanka. Having secured an unassailable 2-0 lead, India decided to test their bench strength for the final game. Prior to the game, five players were handed their debut caps.

Sanju Samson, Nitish Rana, Chetan Sakariya, Rahul Chahar & Krishnappa Gowtham will all start their one-dar careers. Navdeep Saini will also make an appearance while vice-captain Bhuvneshwar Kumar sits out. These are all like-to-like changes and will see no alteration to the team balance.

The third ODI will be a litmus test for a couple of players. Krishnappa Gowtham is at the twilight of his career and he may not receive an opportunity in the future. Samson has been given opportunities before but he has failed to impress. It will be interesting to see whether they make the most of the chance.