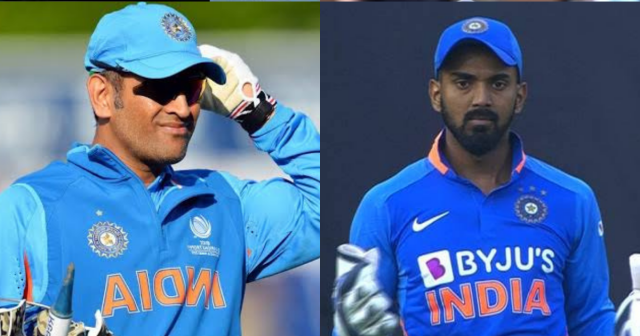 Ms. Dhoni is considered one of the best cricketers to step foot into international cricket. He created a fear in the bowler’s mind due to his boundary-hitting abilities. Also while standing behind stumps he was very fast, the batsman has to think twice before making any move against Dhoni. These skills were backed by supreme leadership skills. During his reign, India reached heights like never before. The trophies in his compartment speak themselves about his success in cricket.

Notably, the former Indian captain is the only skipper to win all the three major ICC titles in white-ball cricket. Apart from his own success he helped and groomed many players to become successful. Big names like Spin bowling great Ravichandran Ashwin, and great batsman Virat Kohli gave credit to Dhoni for their success.

KL Rahul is one of many successful players who made their international debut under MS Dhoni. While talking of Dhoni’s capabilities as a captain, Opener Rahul said that MS Dhoni earned the respect of his teammates with his humble nature. The 29-year-old Rahul also stated that any player who played under Dhoni would be ready to take a bullet for him.

The biggest achievement that as a captain you can have is respect: KL Rahul

“The minute anybody says captain, the first name which comes into anybody’s mind from our generation is MS Dhoni. We have all played under him. Yes, he has won a lot of tournaments, done amazing things for the country but I think the biggest achievement that as a captain you can have is respect of your teammates,” Rahul said in an interaction with Forbes India.

“You know, any of us would take a bullet for him without a second thought. Something that I have learnt from him is how humble he has been through ups and downs. How he put his country ahead of everything else is just unbelievable,” he added.

Meanwhile, MS Dhoni played his last international match in the 2019 World Cup. Adding to it he announced retirement from all forms of the game a year later. Dhoni however is still Captaining Chennai Super Kings in the Indian Premier League (IPL).

He will be looking forward to lifting the Trophy once the second half of IPL 2021 starts. Also, KL Rahul is providing his services in the England tour where India is scheduled to have 5 Test matches against England.