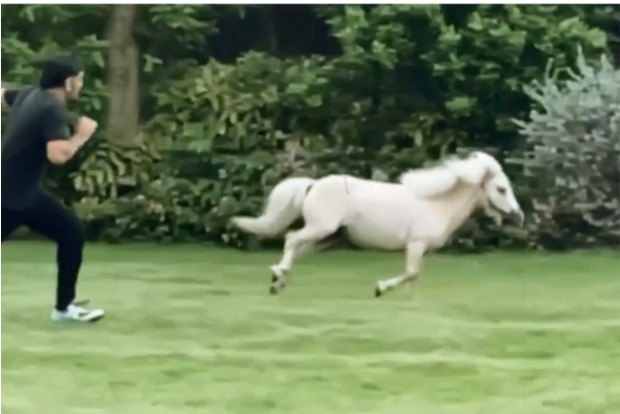 MS Dhoni, who was last seen as the mentor of Team India during the T20 World Cup in UAE, isn’t active when it comes to posting things on social media. But on Sunday his IPL franchise, Chennai Super Kings from their official social media handles posted a cute picture of Dhoni feeding his pet pony.

MS Dhoni is a bike maniac and an animal lover too. The former Indian captain is seen in the picture chilling out and having a wonderful time with the little horse, named Chetak.

The heartwarming picture of MS Dhoni feeding his horse has now gone viral on social media. This pony was the one gifted by a former Indian wicket-keeper to his daughter Ziva.

Earlier, a video of Dhoni running around with his Shetland pony became the talk of the town. In the video shared by his wife Sakshi, the legendary cricketer was seen racing with his pet horse. Last year in November, Sakshi had posted some snaps of his husband with his ‘chaidate’ Honey.

There were few rumors and speculations about whether Dhoni will play in the next season or not. However, Chennai Super Kings (CSK) have retained Dhoni at the price of Rs 12 crore along with Ravindra Jadeja, Moeen Ali, and Ruturaj Gaikwad.

Dhoni recently led Chennai to their fourth IPL title coming from the back of a forgettable IPL campaign in 2020. The veteran will look to emulate the same feat when he plays in front of the Chennai crowd in the upcoming season of the cash-rich league which is expected to be his last.