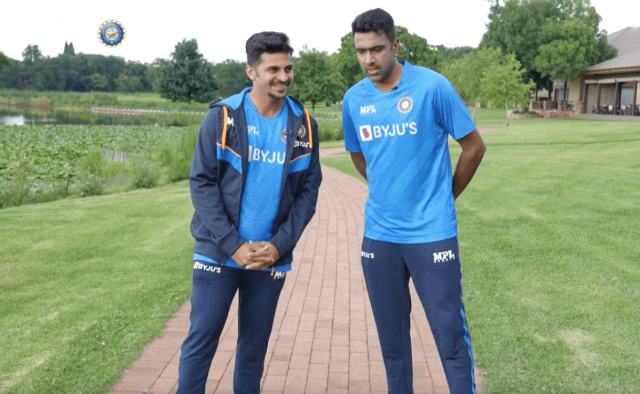 Team India all-rounder Shardul Thakur has stated that he has ‘fond memories of his visit to South Africa in 2017-18 as part of the white-ball squad as he looks to continue his brilliant run in Test cricket.

Thakur claimed 4 for 52 in the only ODI he played in Centurion, a match India won by eight wickets. The 30-year-old also made his T20I debut during the same tour, also in Centurion. Thakur picked up the wicket of Reeza Hendricks and finished with decent figures of 1 for 31 from his four overs. However, India went on to lose the contest by six wickets.

With the second day’s play in the ongoing Boxing Day Test in Centurion being washed out, Shardul Thakur talked about the feeling of being part of the Test team in South Africa. In an interactive session with Ravichandran Ashwin, Thakur said:

“I am totally enjoying it. This is my first Test tour but I was also on the last tour of South Africa. I have fond memories of it. I took a four-wicket haul in the only one-dayer I played here and also it was my T20I debut here in Centurion itself.”

The all-rounder added that he is keen to carry on the good work he did in Australia and England, having contributed with both bat and ball at key moments. Thakur asserted:

“I am looking forward to it. I hope it (good performance) comes in South Africa too. Two overseas tours have been successful for us as a team. I would be more than happy to contribute in South African conditions.” Thakur claimed seven wickets and scored a half-century in Brisbane at the start of the year. In England, he scored fifties in both innings of the Oval Test scoring 57 runs in the first innings and 60 runs in the second innings apart from picking up three important wickets.

In his short international career, Thakur has impressed fans and critics alike with his ability to deliver under pressure. On how he manages to pull it off, the all-rounder told Ashwin that his self-belief, apart from preparations, plays a big part.

Among a lot of things that the two discussed on the show titled “Walk & Talk”, Shardul Thakur asked Ravichandran Ashwin about his dance moves.

Ashwin has in the past posted videos of him attempting dance moves with his teammates like Washington Sundar and with Hardik Pandya and Kuldeep Yadav.

“If I have to look back at it, I don’t know whether you got motivated by my first video which was on a song by actor Vijay, which is in fact quite popular. To be honest this video of mine with Washi and Hari, it was there in my camera roll for a long but I didn’t think of posting it. I decided to post it after I saw the video of you, Shreyas, and Rohit dancing. It seemed very similar but you guys were better choreographed and stuff like that,” Ashwin said on a lighter note.

“Dance is something that is completely out of the syllabus for me. I look at myself and I think I want to dance in a certain way but I definitely cannot,” the off-spinner added.