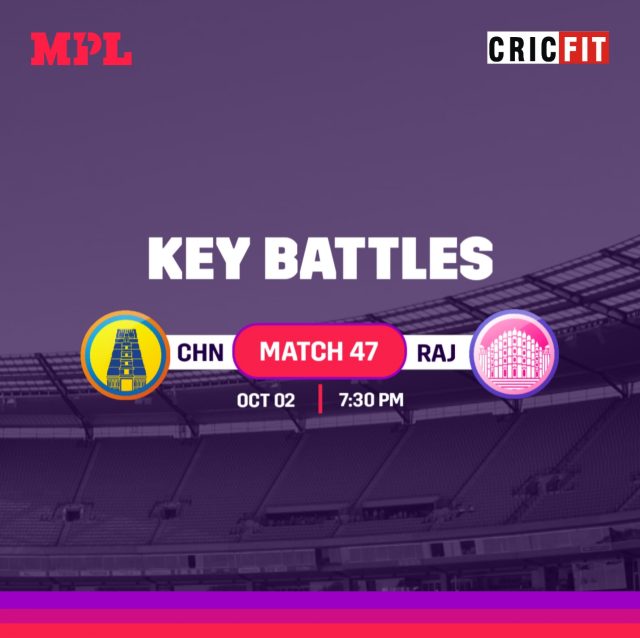 Rajasthan Royals (RR) face Chennai Super Kings (CSK) in a must-win game in Abu Dhabi on Saturday. CSK have already qualified for the playoffs while the Royals need to win all their remaining games to give themselves a chance of making it to the playoffs. They also need a few other results to go their way as well.

CSK have lost two out of their 11 so far. The side has been clinical under MS Dhoni this year after faltering in IPL 2020. MS Dhoni has acknowledged doing their process right and learning from their mistakes from last year. Their big players have performed in crucial games and it was a complete team effort that took them to the top spot in the points table.

Rajasthan Royals, on the other hand, have relied heavily on Sanju Samson. He has been the solo performer for the Royals with their big-match players. The Royals will be on the backfoot against CSK as they head into that clash tonight.

On this note, let’s take a look at the 3 key battles from the RR vs CSK clash in Sharjah for MPL fantasy cricket:

Samson is third on the IPL 2021 points table and is his team’s highest run-scorer in the season so far. He has hardly got support from the other end. Against CSK, he will be up against Ravindra Jadeja who is not in the highest wicket-takers list but has been economical as ever.

Deepak Chahar is another bowler Samson will be up against. Chahar has been fabulous inside the powerplay picking wickets almost regularly.

The CSK seamer has had an upper hand against Samson. In six innings he has scored just 39 runs against Chahar striking under 140.