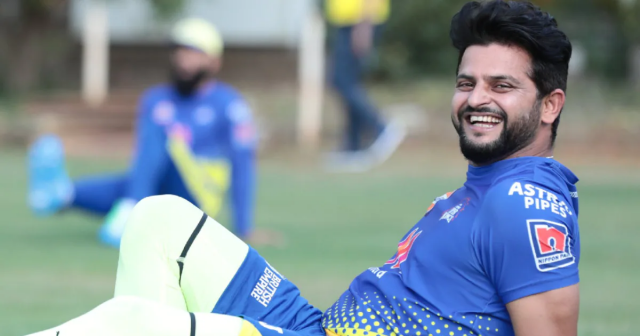 The 44th game of the IPL 2021 featured Chennai Super Kings (CSK) and Sunrisers Hyderabad going against each other. The game was held at the Sharjah Cricket Stadium.

Meanwhile, Mr. IPL, Suresh Raina, stole the limelight when he demonstrated his football skills during the match. A video clip of Suresh Raina dribbling the football has gone viral on social media.

The incident happened when SRH batters Jason Roy and Wriddhiman Saha were on the crease. In the video, it can be seen that Suresh Raina caught the ball with his foot during the second over and then flung it in the air before catching it. Raina’s football skills were loved by the fans.

MS Dhoni won the coin toss and chose to bowl first, taking into account the Sharjah ground’s short dimensions.CSK replaced Sam Curran in the starting XI with Dwayne Bravo. Sunrisers Hyderabad struggled to get enough steam in their innings, though Wriddhiman Saha scored 44 and young stars, Abdul Samad and Abhishek Sharma, both made 18 runs.

SRH ended on 134/7, with Rashid Khan also contributing 17 crucial runs. Josh Hazlewood registered figures of 3/24 for CSK, while Bravo got 2 wickets for 17. Ravindra Jadeja and Shardul Thakur, both took a wicket each.

In reply, Ruturaj Gaikwad and Faf du Plessis started with a solid 75-run partnership. That helped Ambati Rayudu and MS Dhoni to finish the match comfortably. In the end, Dhoni smacked Kaul for a six into the mid-wicket stands, guiding CSK to a victory with 6 wickets and 2 balls remaining.

Notably, CSK became the first side to seal their place in the playoffs in IPL 2021. They have done well this season after failing to qualify for the knockout stage in the last season. That was the first time that the MS Dhoni-led side failed to enter the play-offs.

CSK has won nine of the eleven matches they have played so far this season. Given their outstanding net run rate, one more win might very well guarantee them a spot in Qualifier 1.