The Kolkata Knight Riders (KKR) will take on the Rajasthan Royals (RR) in a do-or-die encounter in Match 54 of the Indian Premier League at the Sharjah Cricket Stadium.

This will be the last league game of the tournament for both the teams in this edition of the IPL. Kolkata Knight Riders who won against the Sunrisers Hyderabad in their last match, are favourites to win this one too looking at the form their team is in right now.

They need a win to keep their playoffs chances alive. KKR’s net rate is better than defending champions Mumbai Indians who are too fighting hard against the odds to finish in the top 4.

Rajasthan Royals who are almost out of the tournament after their defeat to the Mumbai Indians will like to add 2 points to their name in their last encounter. Sanju Samson-led Royals will like to finish the reason on a positive note for uploading the spirit of the youngsters in the team and as well as the team management. 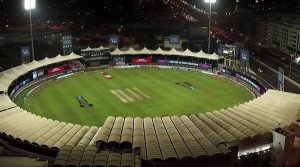 It’s a double-sided surface we have witnessed at Sharjah so far in the tournament. The Pitch doesn’t expect to change too much for the bowlers. The Sharjah wicket has tremendously helped the bowlers clinch some wickets.

Moreover, it isn’t bad for betting either. The ball does come onto the bat nicely.