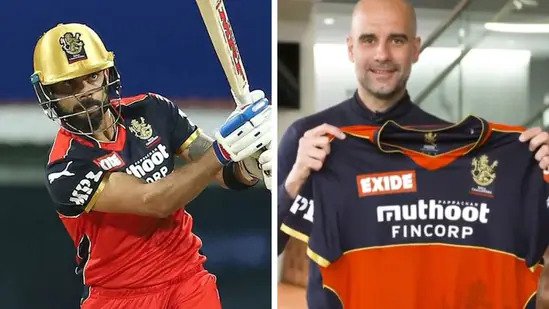 Virat Kohli is a global phenomenon was keeps raising the bar for others both on and off the field. Now one of the greatest football managers of all time Pep Guardiola has been introduced to cricket. All thanks to Virat Kohli as Guardiola now knows about his side Royal Challengers Bangalore (RCB) and the IPL.

A few months back during an Instagram live session, Guardiola has asked Kohli to teach him about cricket rules. Guardiola who is currently the manager of the England football club Manchester City admitted that he has gained interest in cricket in recent times.

Virat Kohli Reacts After Pep Guardiola Thanks Him For RCB Jersey

He had also told Kohli that he finds cricket rules very complicating so he wants him to teach him the rules someday. Kohli has now taken the first step towards it by gifting him the RCB jersey. Pep Guardiola was delighted by Kohli’s gesture and thanked his ‘friend’ Kohli for the jersey.

‘It’s time to finally learn cricket’s rules. Thanks to my friend @virat.kohli for the shirt. Now is your turn to use your Man City shirt”, Guardiola said in an Twitter post.

Also Read: Watch- Virat Kohli Kisses And Does The Baby Celebration For His Daughter After Reaching 50

It was during the last IPL season when Kohli had promised Guardiola that he will teach him cricket rules whenever he meets him. The RCB skipper is now soon expected his Manchester City jersey which will be gifted by Guardiola.

Meanwhile, Kohli also reacted after Guardiola received his RCB jersey and wrote “Si Señor!” which means Yes Sir. The IPL season for RCB keeps getting better as they keep winning both on and off the field. They play their next match against Chennai Super Kings on Sunday afternoon in Mumbai.