Pandya brothers Hardik and Krunal joined the Mumbai Indians camp in the UAE on Thursday. They made a grand entry into the team hotel in a luxurious white-colored Jaguar. Mumbai Indians are placed fourth in the points table at the moment with four wins from their first seven games. Hardik and Krunal did not have a good first half of the season and will look to give their best in the second half.

Meanwhile, in a video uploaded on Mumbai Indians’ Twitter handle, the Pandya brothers are shown to be entering the team hotel in style. Both the brothers have a lot of style and swag which was for all to see in the way that they entered.

“The 𝙋𝙖𝙣𝙙𝙮𝙖 brothers arrived yesterday with their usual 𝙨𝙬𝙖𝙜 and a whole lot of 𝙘𝙤𝙣𝙫𝙞𝙘𝙩𝙞𝙤𝙣!” wrote the MI Twitter handle as they welcomed both of them.

The 14th season, which was postponed in May this year in the wake of the COVID-19 pandemic, will resume on September 19 in Dubai with a blockbuster clash between Chennai Super Kings and Mumbai Indians. The next game will be between Kolkata Knight Riders and Royal Challengers Bangalore in Abu Dhabi. 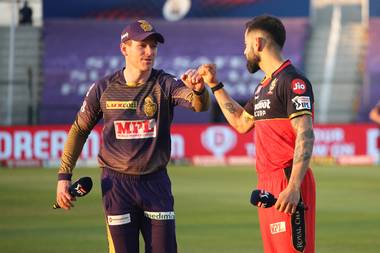 Sharjah will host its first game on September 24 when Royal Challengers Bangalore take on Chennai Super Kings. In all, 13 matches will be held in Dubai, 10 in Sharjah, and 8 in Abu Dhabi.

The BCCI had to postpone the IPL 2021 season after several positive cases from different camps back in May. It has released a 46-page health advisory for the teams and the franchises to be followed as and when the second phase gets underway.