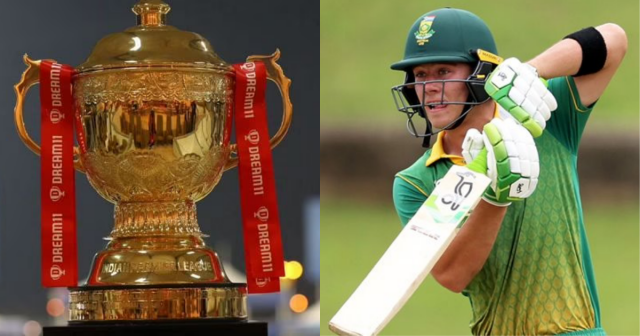 With his heroics in the U-19 World Cup 2022, ‘Baby AB’- Dewald Brevis has attracted many eyeballs. Brevis broke the 18-year old record of Shikhar Dhawan, as he finished with 506 runs in the tournament. This is now the most number of runs scored by an individual in a single edition of the U-19 World Cup. Shikhar had scored 505 runs in the 2004 edition.

Dewald Brevis is one of the 590 players that have been shortlisted for the IPL 2022 auction. He has set his base price as 20 Lakhs but is very likely to get a much higher amount than that because many teams would like to get him in their squad.

Dewald Brevis has scored more #U19CWC runs in a single edition than any other batter in the history of the game#BePartOfIt pic.twitter.com/pzA16FjaWb

Here are 3 teams that can pick Dewald Brevis In IPL 2022 mega auction:

The Ahmedabad franchise signed Hardik Pandya (INR 15 crore), Rashid Khan (15 crore) and Shubman Gill (8 crore) as their three draft picks ahead of IPL 2022 mega-auctions. Gary Kirsten will work both as a mentor and batting coach for the Ahmedabad team. He was India’s head coach during the victorious 2011 Cricket World Cup campaign.

Kirsten has also been with many T20 franchises around the world. The 54-year old would definitely have Dewald Brevis in his radar after watching the youngster perform in the U-19 World Cup.

Brevis can be a great batting option for the new franchise at no.3,4 or 5 and can also chip in with 2-3 overs of leg-spin when required.

Dewald Brevis has been compared to AB de Villiers, Mr. 360, throughout the U/19 World Cup and here is my effort (apart from the same number on his back and cricket gear) to try and show why through a short compilation. #U19CWC #dewaldbrevis #junior360 pic.twitter.com/fz7AcyG0Wa

IPL’s most successful team Mumbai Indians, are known for nurturing young talent. They have provided opportunities to a number of players like Yuzvendra Chahal, Hardik Pandya, Jasprit Bumrah, and Marco Jansen, long before they made their international debuts.

“To back youngsters has been MI’s philosophy since 2010,” is what the owner Nita Ambani says.

Prior to the IPL 2022 auctions, MI have retained Rohit Sharma, Jasprit Bumrah, Kieron Pollard, and Suryakumar Yadav. So it’s clear that Mumbai will use the auction to add more bowlers and middle-order batters in their squad.

Dewald Brevis can be an excellent pick for them since he can construct an innings and provide a solid platform for Kieron Pollard to finish the innings. Brevis can also be a great backup option for the overseas batter slot.

Now that AB de Villiers has declared his retirement, RCB will be on the lookout for a long-term option who can bat in the middle order. Dewald Brevis can be the perfect choice for them as he has the ability to consistently hit boundaries and can also be counted on to play a long innings in case early wickets fall.

Brevis is also known as ‘Baby AB‘ since his batting style is similar to that of AB de Villiers. Brevis himself had recently stated that he wants to play for RCB in the Indian Premier League and his photo of wearing the Royal Challengers Bangalore (RCB) shirt had also gone viral on social media