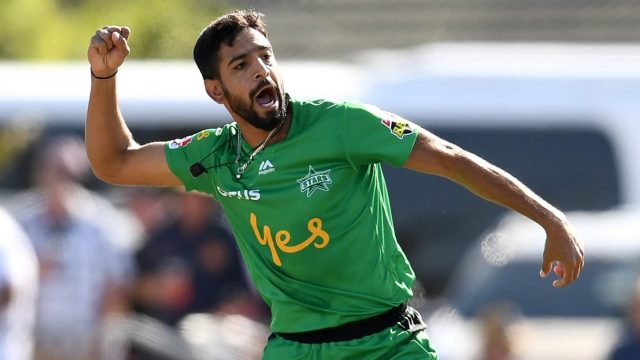 Haris Rauf has been a pace bowling sensation ever since he became a break out star in the Big Bash League a couple of years ago. Since then Haris Rauf has gone from strength to strength earning him Pakistan cap in the limited-overs format and was a vital member of the Pakistani team who had a blistering run at the T20 world cup that saw them reach the semi-finals before losing out against the eventual winners Australia.

It’s his latest Twitter post that has created a buzz among cricket fans. He was seemingly overwhelmed with joy as he was gifted a CSK jersey with MS Dhoni’s signature. He thanked team manager Russel Radhakrishnan for the gesture. And Russel Radhakrishnan was quick to respond by saying that MS Dhoni always delivers on a promise.

“The legend & capt cool @msdhoni has honored me with this beautiful gift his shirt. The “7” still winning hearts through his kind & goodwill gestures. @russcsk specially Thank you so much for kind support,” read Rauf’s tweet thanking Chennai Super Kings, to which Russel Radhakrishnan replied  “When our captain @msdhoni promises he delivers , glad you love it champ #whistlepodu @ChennaiIPL,” wrote the CSK manager while reacting to Rauf’s post.

When our captain @msdhoni promises he delivers , glad you love it champ #whistlepodu @ChennaiIPL https://t.co/3qybd0oFEE

Even though MS Dhoni had a poor season by his standards except for that brilliant knock in the playoff vs Delhi Capitals, he is set to captain CSK again for his 15th season in IPL as he was retained by CSK for a massive price of 12 crore after MS Dhoni lead Chennai Super Kings to another ecstatic IPL Title victory beating Kolkata Knight Riders at Dubai International Stadium.

Meanwhile, Haris Rauf is trying to win Lahore Qalanders their first PSL title ever as the Pakistan Super League is set to start from January 21st onwards.