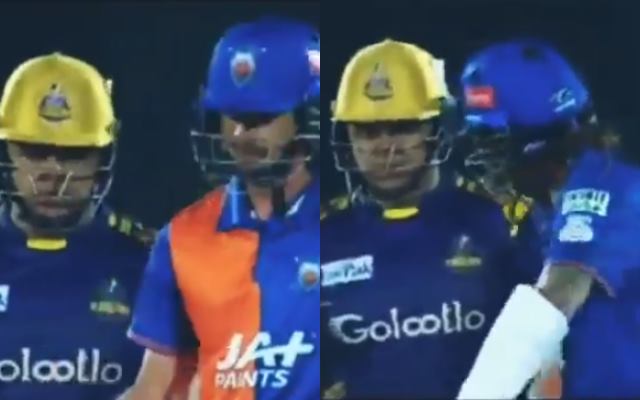 A hilariously incident took place between Azam Khan and Dale Steyn during the Lanka Premier League is currently underway in the Island nation of Sri Lanka. Post the completion of the IPL in India, some players right away edged into the LPL which in its very first edition was being conducted in Sri Lanka. Five teams are battling it out for the inaugural title with the final expected to take place on 16th December in Hambantota.

The incident between Azam Khan and Dale Steyn was nothing but just about ‘Fishermen’. Youngster Azam Khan was keeping wickets for the Galle Gladiators when Dale Steyn walked out to bat who was featuring in the tournament after completing his 14 days quarantine in Sri Lanka as he had returned back to South Africa after the completion of the IPL in India.

‘Sir you know, I’m a fisherman too’ – Azam Khan to Dale Steyn

As soon as Dale Steyn took his guard, Azam Khan from behind the stumps was heard saying ‘Sir you know, I’m a fisherman too’ this left Dale Steyn completed shocked as he clearly wasn’t expecting such a conversation initiation from Azam Khan.

In return, all Dale Steyn could say was ‘really’. This little incident left the commentators into splits especially Roshan Abeysinghe who was in the commentary at the time of the incident.

It was also reported that after the conclusion of the match between Kandy TUskers and Galle Gladiators, both Dale Steyn and Azam Khan had a 15-minute long conversation regarding fishing. Well none the less, this was clearly out of the box even for the spectators watching from home since we would usually expect wicket keepers sledging from behind the stumps.