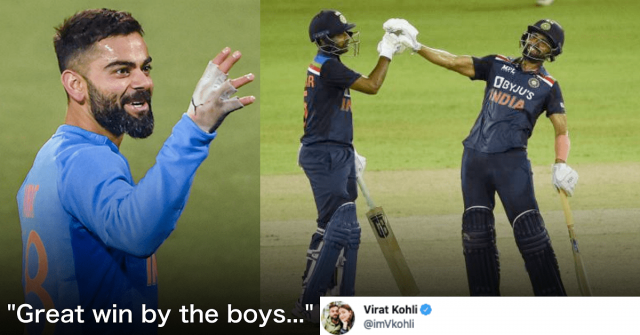 Team India’s star on Tuesday night Deepak Chahar has revealed what India skipper Virat Kohli texted him after the whirlwind knock in the 2nd ODI against Sri Lanka at the R Premadasa Stadium in Colombo.

India were in a spot of bother losing all their top batsmen with 100+ runs still required to cross the line. Although it looked difficult, the cricketers believed in themselves and the result is there for everyone to see. 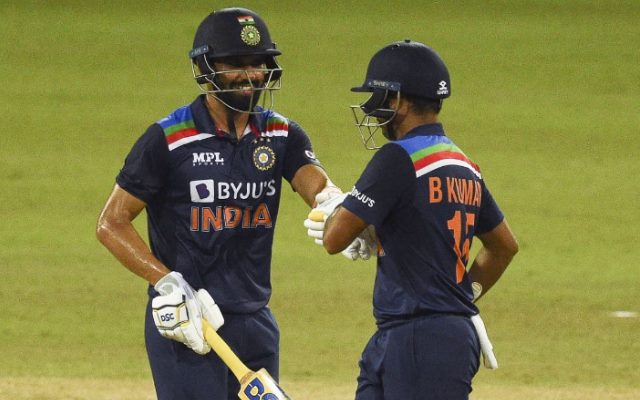 Deepak Chahar stitched two crucial partnerships – 33 with Krunal Pandya and unbeaten 84 with Bhuvneshwar Kumar to take India home. As soon as Deepak Chahar hit the winning runs for India in the first ball of the last over.

Virat Kohli, who is currently in England with the rest of the Indian Test squad, was seen glued to the TV screen in Durham during the second ODI between Shikhar Dhawan-led India and Sri Lanka.

He dropped a text to Chahar post his batting heroics in the game. Speaking at the press conference, Deepak Chahar revealed:

The India skipper also took to microblogging site Twitter to wish the entire side for pulling an emphatic win. Virat kohli wrote:

“Great win by the boys. From a tough situation to pull it off was an amazing effort. Great to watch. Well done DC and Surya. Tremendous knocks under pressure.”

Great win by the boys. From a tough situation to pull it off was an amazing effort. Great to watch. Well done DC and Surya. Tremendous knocks under pressure. 🇮🇳

The third and final ODI between India and Sri Lanka is on July 23 (Friday) in Colombo. It will be followed by a three-match T20I series between the two teams.