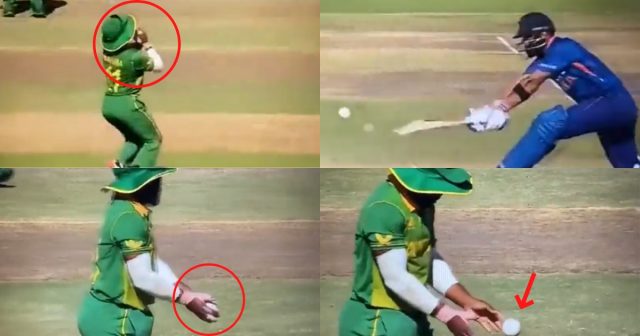 The Indian tour of South Africa has not been short of drama, both on and off the field. Be it Bumrah and Jansen having a go at each other in the Test series or Pant and Van der Dussen having a few words in the middle, both sides have been really charged up. And that has transcended into the ODI series as well.

Long gone are the days when Indian teams abroad used to be overawed by their counterparts and were taken lightly. This generation of cricketers can give as good as they get, and this very aggression also helps them perform better.

The latest addition to these on-field confrontations was the tussle between Virat Kohli and Temba Bavuma during the 1st ODI. The two were seen having a heated conversation when Kohli appeared to have thrown the ball angrily towards Bavuma in the first innings.

Even though the incident didn’t turn ugly, things boiled up when Kohli came to bat in the second innings. The former Indian captain was playing a solid knock for the team, leading a steady chase. However, he eventually mistimed a shot off Tabraiz Shamsi and holed out straight to Bevuma.

The South African captain found the perfect revenge, kicking the ball angrily after completing an easy catch. With Kohli being the mainstay in the Indian middle order, and the set batsman at the time, his wicket dented India’s hopes of completing a successful chase.

There was a mini-collapse past Kohli’s wicket and India never really recovered from it, losing the 1st ODI and giving South Africa the perfect platform to push for a series win. With a lot more games still to come on this tour, one won’t be surprised to see more of these fiery exchanges between the players.