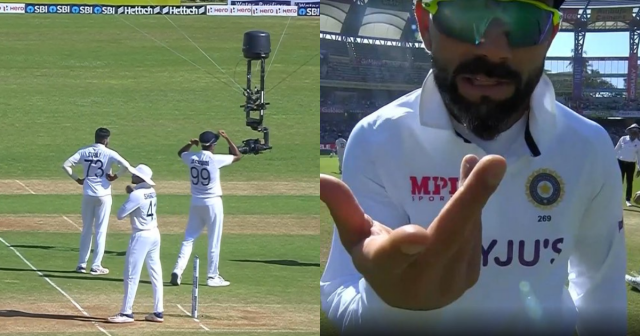 Team India are currently taking on New Zealand in the second Test in Mumbai. While the hosts are in a strong position after having a lead of over 500, one ‘spidercam’ disrupted the play and forced them to take an early break as well.

A few overs before the tea break in the match at Wankhade Stadium, the cable-suspended camera system malfunctioned. It dropped down and it was hanging a couple of feet above the field as well. While the control room couldn’t get it back up, it forced on-field umpires Nitin Menon and Anil Chaudhary to call for an early break for tea as well.

New Zealand batters Daryl Mitchell and Will Young were in the middle and struggling against the Indian spinners. Meanwhile, Indian players, including Virat Kohli, Suryakumar Yadav, and Ravichandran Ashwin decided to have some fun with the spidercam too.

When the Spidercam stopped play. pic.twitter.com/toZ8MPKzQN

India five wickets away from securing a victory

As far as the game is concerned, Team India posted 325 runs in the first innings riding on a brilliant century from Mayank Agarwal. In response, New Zealand were bowled out for a paltry score of 62 runs, with Ravichandran Ashwin returning with four wickets while Mohammed Siraj grabbed three.

With 263 runs lead under their belt, India added another 276 runs before declaring the innings with significant contributions from the top-order batters to post a daunting total of 540 runs.

The bowlers once again joined the party with Ravichandran Ashwin leading the pack to have the Kiwis at 140/5 at the end of day 3’s play.