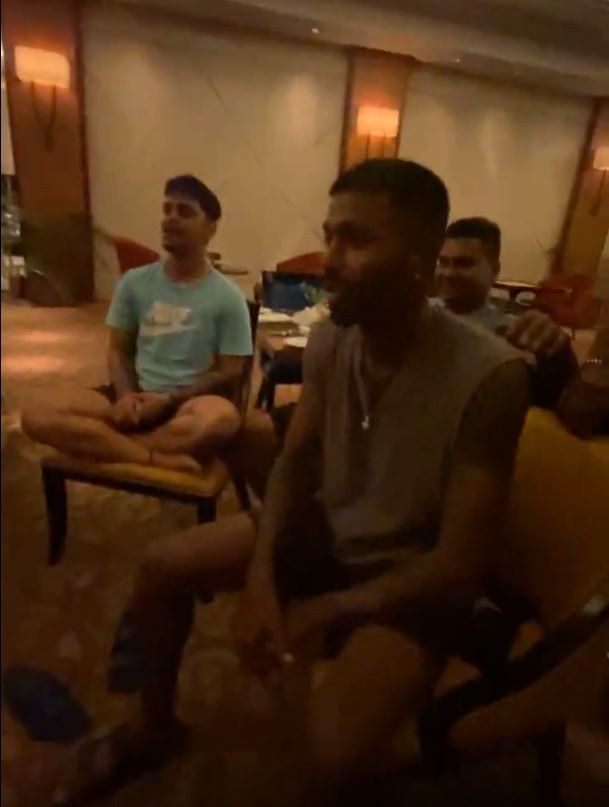 On Tuesday, the young Indian squad clinched a memorable win against the Lankans in the second ODI of the 3-match series. Following the victory, Team India had a singing session as part of their celebrations in Sri Lanka, with Hardik Pandya, Ishan Kishan, and Suryakumar Yadav in the midst.

The Indian team continued to show its excellent resilience and grit in tough situations. Since the tour down-under in 2020, it has become a norm for the Men in Blue to dig their way out of trouble. A lot of credit goes to the ‘never give up’ attitude adopted by the entire Indian contingent. There have been several such instances and on July 20, we witnessed the latest event in the saga.

A stunning lower-order rearguard act saw India come from behind to win the second ODI. It sparked joyous celebrations in the Team India’s dressing room, and it continued well into the night in Sri Lanka. The Indian team gathered in the halls to revel in their achievement. They sang the famous Bollywood song ‘Bheegi Bheegi’ from the movie ‘Gangster’. A staff member led the group, while Hardik Pandya and Krishnappa Gowtham joined in.

India had its back to the wall in their pursuit of Sri Lanka’s fighting total of 275. Half the side was sent back to the pavilion by an inspired Lankan bowling attack. Although there was no pressure of required rate, India were still 160 runs away from claiming the series. Suryakumar Yadav was the last recognized batsman at the crease, and after his dismissal, things looked bleak.

However, Deepak Chahar and Bhuvneshwar Kumar provided late resistance. They showed excellent character and forged a match-winning partnership of 84 runs. India eventually beat Sri Lanka by three wickets and five balls to spare. It will go down as one of the most memorable wins for India in their One Day International history.