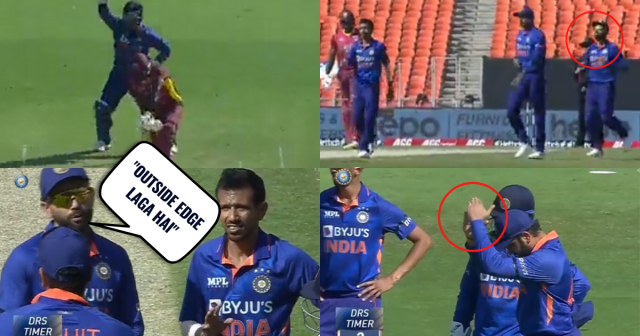 From the ongoing first ODI between India and the West Indies, a particular moment has caught the attention of fans and they can’t stop showering praise on the duo of Rohit Sharma and Virat Kohli on social media.

During the 22nd over of West Indies innings, the Indian team appealed for the caught-behind dismissal of Shamarh Brooks. The on-field umpire adjudged it not out. Captain Rohit Sharma appeared to be on the fence about taking a DRS at first.

Virat Kohli then walked over to Rohit and convinced him that Brooks has edged it. “Mereko toh laga outside edge laga hai (I think it has taken an outside edge),” Kohli said.

Rohit took the DRS and the TV replays revealed that Virat was right,  the batter had indeed edged the ball. This was the third successful review for Team India in the match. Watching the two superstars of Indian cricket work in tandem, fans called it “Moment of the day”.

You do not need to be a captain to be the leader: Virat Kohli

Virat Kohli recently stated that being a leader within a team does not require a ‘captaincy tag’, implying that senior players in Team India are always involved in decision-making.

Kohli also used the example of MS Dhoni, who handed over the captaincy to him but continued to provide valuable suggestions for the team’s improvement.

“You do not need to be a captain to be the leader. When MS Dhoni was in the team, it was not like he was not the leader, he was still the guy from whom we wanted to have inputs,” Kohli had said on an episode of ‘Fireside Chat’.