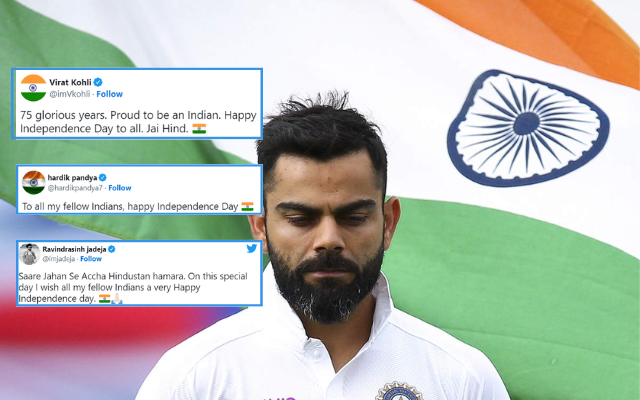 Team India cricketers, Virat Kohli, Jasprit Bumrah, and others shared wishes for their fellow countrymen on the occasion of Independence Day on Monday, August 15. The country is celebrating Azadi Ka Amrit Mahotsav to mark 75 years of Independence from British Rule. Various functions have been held all across India to celebrate the day.

India achieved freedom on August 15 in 1947 from the British. On 14th August 1947, the Constituent Assembly of India met for its fifth session in New Delhi, where Jawaharlal Nehru delivered the Tryst with Destiny speech proclaiming India’s independence. Every year on the eve of Independence Day, the President of India delivers the “Address to the Nation”.

Indians pay their tributes to the freedom fighters and remember the freedom struggle that lasted for years every year on Independence. The Prime Minister hoists the Indian flag on the ramparts of the historical site of Red Fort in Delhi. This year, under the banner of Azadi Ka Amrit Mahotsav, several events will take place to celebrate the occasion.

Social media is flooded with wishes celebrating 75 years of India’s Independence. From Virat Kohli to Jasprit Bumrah, Indian cricketers too have shared wishes on the occasion of Independence Day through their social media profiles.

Let’s take a look at the wishes shared by Indian cricketers on the occasion of Independence Day:

75 glorious years. Proud to be an Indian. Happy Independence Day to all. Jai Hind. 🇮🇳

Sharing wishes on Independence Day, Jasprit Bumrah shared a picture of himself along with his teammates with the Indian flag from the ground. He wrote, “Wishing everyone a very Happy Independence Day #JaiHind“

Indian all-rounder Hardik Pandya shared a picture of himself with the Indian flag and wrote, “To all my fellow Indians, happy Independence Day”

To all my fellow Indians, happy Independence Day 🇮🇳 pic.twitter.com/rHRXj7VWVo

Playing for India was a dream and also a huge responsibility to give my best for the nation. It was a proud feeling that I'll always cherish. As our nation completes 75 years of independence, let's strive harder to reach new heights. #IndiaAt75 #IndependenceDay2022 pic.twitter.com/M6EVisDeLW

Happy Independence Day to everyone, I wish you all faith in the words, freedom in the mind and pride in your souls. Let’s salute this glorious nation on its Independence Day! #mshami11 #IndependenceDay pic.twitter.com/2K2SL3eTDV

My love for the nation is boundless and endless. All I desire is happiness for my country and its people while
remembering the sacrifices of all the heroes who made it happen. 🙏
Wishing everyone a happy 75th Independence Day! Jai Hind 🇮🇳#IndiaAt75 pic.twitter.com/dTVCtC0j6t

Respect to the ones who shed their breath to allow us to breathe fresh air today. Happy Independence Day! Jai Hind 🇮🇳🙏🏼 #IndependenceDay2022 pic.twitter.com/5Ay1elxwx9

75 years since freedom, we have come a long way and the upside is even more exciting. Proud to be an Indian and Happy Independence Day to everyone. #IndiaAt75 #IndependenceDay

From being called snake charmers to becoming a nuclear powered state

Story of India from riches to rag and back to the riches is inspiring. I thank god for being an Indian.