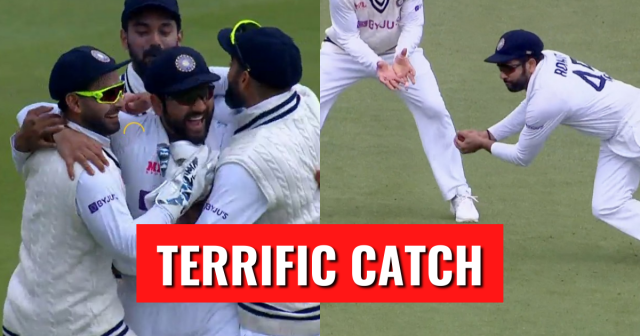 India started on the front foot on day 2 of the fourth Test at The Oval. Umesh Yadav struck twice in quick succession to send back overnight batsmen Craig Overton and Dawid Malan. While Overton was caught at slips by Virat Kohli, Rohit Sharma took a diving catch at slips to remove the well set Dawid Malan.

Malan was the big hope for England after the big wicket of Joe Root at the fag end of the day on the opening day. Bowling around the wicket, Umesh Yadav got the ball to take the outside edge of Malan’s bat as Rohit Sharma dived onto his right to complete a terrific catch.

Rohit Sharma Snaps One Up At Slips

Umesh on fire! 🔥
Gets Malan to nick one to Rohit at slip.

Malan was the second wicket of the morning after Overton edged one through to the slips of the bowling of Yadav too. The England pacer was Yadav’s 150th Test wicket. The Indian pacer is making a comeback into Test cricket and so far has been on the money. His last Test was against Australia last year in India’s tour down under.

Umesh Yadav Gets To 150 Test Wickets

Umesh Yadav was one of the two changes that India made heading into the Oval Test match. Ishant Sharma and Mohammed Shami, the two Indian pacers were rested with Yadav and Shardul Thakur replacing them.

Thakur added a fifty-run stand with Umesh Yadav who scored 10 runs in that partnership before striking with the ball. Virat Kohli scored exactly 50 before getting dismissed and after him there was hardly any contribution from the openers and Pujara and Rahane.

Meanwhile, Aakash Chopra in his day 3 preview said that India would by the third session of the day’s play.

“India will be batting in the third session. If there is a lead, it will not be a big one. This is what I am expecting from this day. I feel England will take the lead. Although, they are three down for 53 and Root has also been dismissed, but I still feel they will take the lead. It could be a slender lead, but they can take the lead because they have a lot of depth in batting. A lot of people are yet to come. With Woakes and Pope coming in, I feel this team has got strengthened a little more” said Chopra on his recent Youtube video.