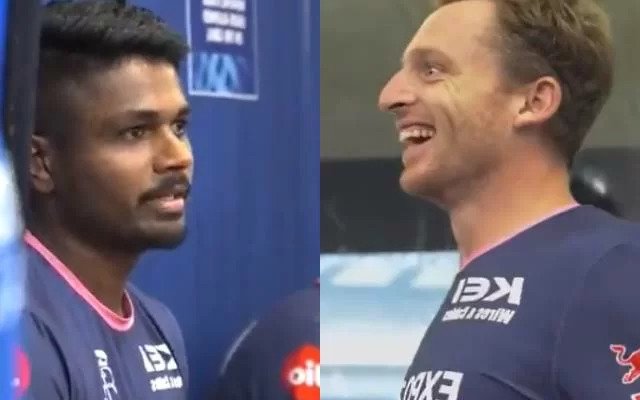 Sanju Samson acknowledged Jos Buttler for his key inputs while he was captaining against Delhi Capitals in IPL 2021. The Rajasthan Royals side were able to restrict a strong DC batting line up to a par score as Samson’s captaincy stood out. Samson after the win gave a special mention to Jos Buttler for helping him during the field and even referred to him with a unique nickname.

Samson referred to Buttler as ‘Jos Bhai’ which made the entire team laugh out loud. It seems Butler quite likes his new nickname as he was seen giggling while his other teammates started calling him ‘Jos Bhai’. Now with Ben Stokes no longer part of IPL 2021, Buttler continues to be the most experienced RR players who advise young captain Samson while making decisions on the field.

“I really enjoyed the intensity in the ground today and as Sanga [Kumar Sangakkara] said, I was able to make some really good decisions. That was only possible because Jos bhai really helped me,” Samson says in the video shared by Rajasthan Royals on their social media accounts.

Meanwhile, the first win as skipper in IPL 2021 would have given Samson a lot of confidence and he will be aiming to improve with each match. Also, he would also want his beloved ‘Jos Bhai’ to be at his best and contribute more with runs going ahead in IPL 2021. Buttler off late hasn’t been in the best of nick but a player of his class is never far away from regaining his top form back.

The Rajasthan Royals are currently playing against Chennai Super Kings in IPL 2021. CSK are currently 66 for 2 after 8 overs with Moeen Ali and Suresh Raina at the crease.

Also Read: AB de Villiers Opens Up On His Partnership With Glenn Maxwell Against KKR