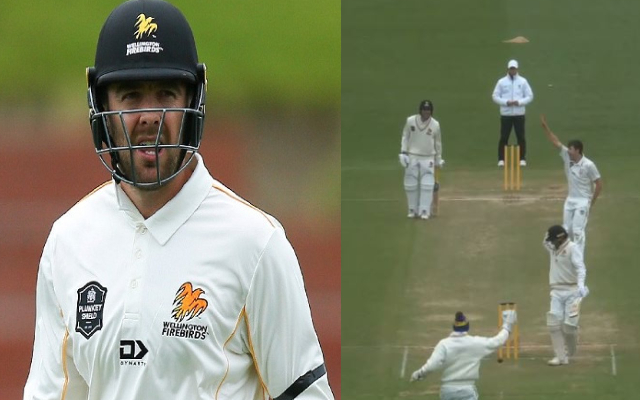 New Zealand Batsmen Tom Blundell has entered a unique list of players who have been ruled out obstructing the field as during the Plunket Sheild game between Wellington and Otago at Basin Reserve the top order batsmen was given out for handling the ball.

The infamous incident of Ben Stokes being given out happen a few years back when Ben Stokes after playing one straight down the throat of Mitchell Starc was at the receiving end for a run out when Stokes tucked his hand out to avoid the ball from hitting the wicket.

Also Read: Sourav Ganguly Confirms IPL 2021 Will Be Held In India, Along With England Series And Domestic Cricket

Tom Blundell Given Out For Handling The Ball

On similar grounds, when Tom Blundell was facing Jacob Duffy when Blundell tried defending the fast bowler that is when the ball bounced right under the bat then spun back on to the stumps.

Looking at the ball about to hit the stumps, Blundell uses his feet to tap it away only to make things worse as the ball was again redirected towards the wicket, that is when Blundell put his hand out in order to save his wicket as all the fielders went up appealing for Blundell obstructing the field.

Tom Blundell became just the second New Zealand first-class batsman to be dismissed for obstructing the field. The last was Canterbury’s John Hayes more than 60 years ago in the 1954-55 season.

Tom Blundell was dismissed for obstructing the field in the Plunket Shield!

Also, as an aside, can we just appreciate how many woolly hats are being worn… 🤣pic.twitter.com/hEhQfDIXl7