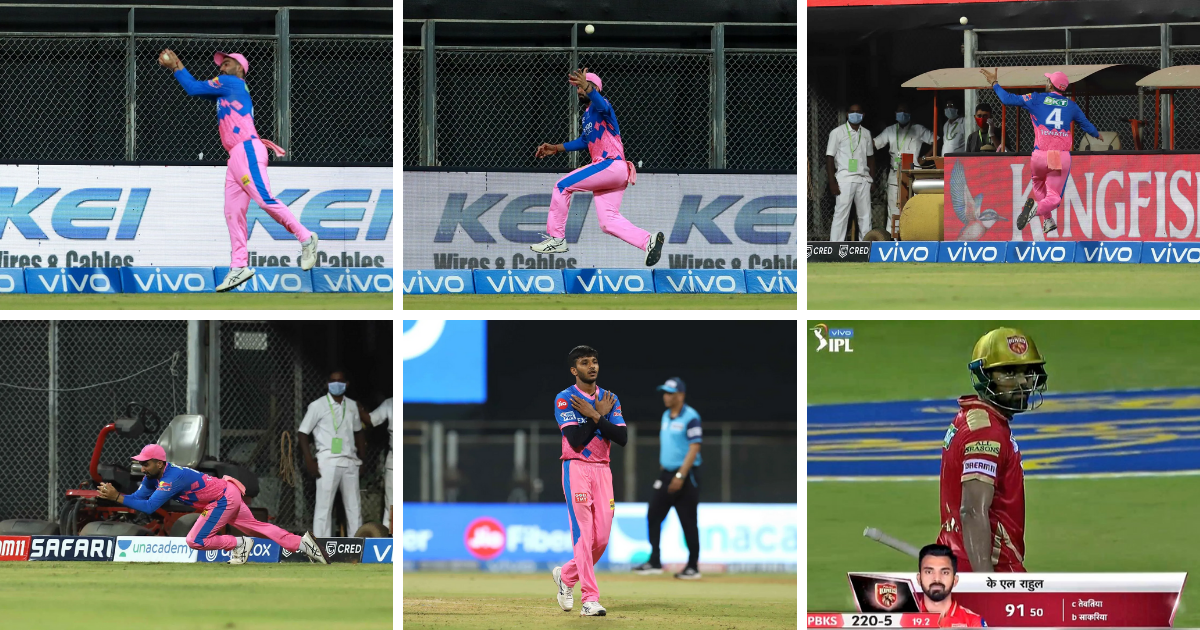 Punjab Kings skipper KL Rahul scored 91 off 50 balls in the team’s campaign opener against Rajasthan Royals on Monday. It took an absolute brilliant catch to remove him and Rahul Tewatia provided it for the Rajasthan Royals. However, this was not before KL Rahul pummelled the Rajasthan bowlers all over the park and formed key stands with Chris Gayle Deepak Hooda.

KL Rahul hit seven fours and five sixes in his knock. In the process, he added 67 with Chris Gayle (40) and then 105 with Hooda. Meanwhile, Chetan Sakariya bowling the final over of the Punjab innings gave five runs and took two wickets.

The wicket of KL Rahul came in the second delivery of the over. Rahul timed it sweetly but found Tewatia in the mid-wicket boundary. It was a special catch from Tewatia who takes it right on the edge of the ropes, with the ball behind him, then tosses it up as he goes over the boundary, before running back in, diving forward and grabbing it again.

Punjab Kings finished on 221/6 courtesy of massive contribution from their skipper KL Rahul and hard hitters Gayle and Hooda. The Royals bowlers were expensive especially their overseas recruits Chris Morris and Mustafizur Rahman. While Rahman went for 45, Morris went for 40.

Royals debutant Sakariya bowled impressively. He bowled two at the atar and two at the death. He went for 31 off his four and picked up three wickets. it included the likes of Agarwal and Rahul, the Kings batting mainstays.

Earlier in the game, Royals new skipper Sanju Samson won the toss and opted to bat first. “I am happy with the players we have. Morris, Stokes, Buttler, Mustafizur are our overseas players. Very excited about the role” he said.

Rajasthan Royals won chasing 223 against Kings XI Punjab in Sharjah last year. Tewatia hit five sixes in the penultimate over of their innings to win it for his side.

Also Read: Chris Morris Talks About Being The Costliest Player In the IPL Auction History