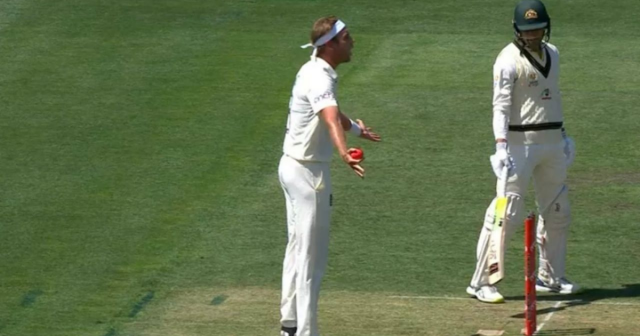 The moving spider-cam during the ongoing 5th Ashes Test angered the England pacer Stuart Broad as it interfered with his sight during the run-up. Broad stopped mid-way and yelled at the camera.

“Stop moving the robot”, shouted Broad from the non-striker’s end.

This happened before the final ball of the 63rd over of Australian innings (Day 2). The camera right behind the Australian batter Mitchell Starc distracted Broad. The 35-year old losing his composure made the commentators crack up.

The batters pulling out just before the delivery due to problems in the sightscreen is a common sight but this was something which is not very commonly seen. Especially when the culprit is a device managed by the camera operators.

Not a fan of the @FoxCricket rover, then? 🤖#Ashes pic.twitter.com/1ctxyHdVC7

Twitter users had some hilarious reactions to this incident, as few people compared it to the stump mic saga in the recently concluded Capetown Test between South Africa and India.

Stuart Broad, the pick of the bowlers for England in the first innings

Stuart Broad was a little disgruntled after missing two of the first three Ashes Tests. “The biggest frustration is losing the Ashes, being 3-0 down and feeling like I’ve not really done anything. Not being able, as an experienced player, to influence a series while it’s live is tough.”, Broad had said after the third game. The veteran pacer has demonstrated his skills in the ongoing pink-ball Test. He took three key wickets in the first innings and only gave out 59 runs in 24.4 overs.

First, he dismissed Usman Khawaja who had scored centuries in both the innings of the previous Test and then took the wicket of No.1 Test batter, Marnus Labuschagne in one of the most bizzare dismissals you will ever see in the game of cricket. When Marnus attempted to flick the ball on the leg-side, Broad bowled him around the legs. He also dismissed tailender Nathan Lyon who was looking dangerous during his stay at the crease.