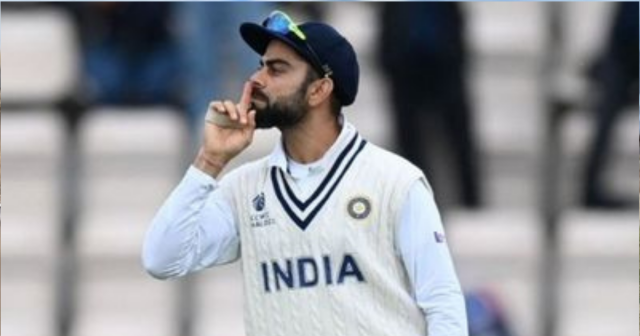 Virat Kohli and Co. lost to New Zealand in the World Test Championship final by 8 wickets. New Zealand was crowned as World Test Champions on 23rd June and was handed over the Test Mace. Although the game was interrupted a lot by rain as two days were completely washed out, still it was a thriller encounter between the top 2 Test sides. And New Zealand clinched the title on reserve day.

There were several eye-catchy moments in the game and one of the most talked about the moment which caught attention was Virat Kohli trying to silence the crowd. Kohli was seen pulling off the ‘shush’ celebration with a finger on his lips during the first innings of Blackcaps in the final at Ageas Bowl, Southampton.

Recently New Zealand left-arm-pacer Neil Wagner revealed the exact reason behind Virat Kohli’s ‘shush’ gesture on the field against the crowd. Neil Wagner said that the crowd was trying to get under the skin of captain Kohli in the summit clash. The crowd was singing ‘In your head Kohli, in your head Kohli, Kohli’. This didn’t go well with Indian skipper Kohli and he decided to do that celebration.

“Yes, the crowd started singing Zombie… They were singing, ‘In your head Kohli, in your head Kohli, Kohli.’ So they were trying to get under Kohli’s skin a little bit and Kohli kept giving it around, giving them the shush fingers. Then there’s a song going to Devon Conway sort of as a way of support, they started singing to him,” Neil Wagner revealed during a press conference organized by New Zealand cricket.

🗣 "When things don't come off, you can say that it was an error of judgment and that's acceptable in sport"

Virat Kohli failed with the bat in the WTC final

The 32-year-old Kohli is among the top players in the world he loves to be on top on the field as well. Virat maintained high intensity throughout the clash.

However, Skipper Kohli was unable to contribute enough runs with the bat to team India. Virat was dismissed by Kyle Jamieson in both innings. Although He scored 44 and 13 runs in the first and second innings respectively.

Due to the failure of Virat Kohli and the team with the bat, the team was bundled at a score of 170. Team New Zealand was given 139 runs target to chase.

At the time of the chase, openers were unable to a brilliant job as they did in the first innings. Still, Kiwis completed the chase very easily and lifted the mace with the help of Kane Williamson and Ross Taylor’s unbeaten stand of 96 runs for the third wicket.