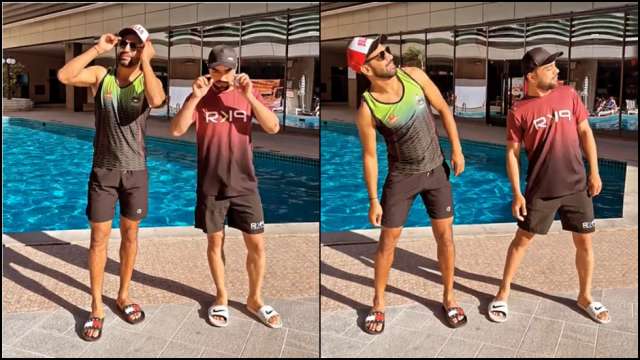 Lahore Qalandars cricketer Rashid Khan imitated the famous hook step of the song ‘Srivalli’ from Pushpa movie with his teammate Haris Rauf. He is the latest to join the bandwagon that has already seen many cricketers replication the trending step.

In a video shared by Rashid on his official Instagram handle, the Afghan spinner was seen copying the step to perfection with his teammate. Rashid Khan also forgot to wear the glasses which is e necessary while doing the step but imitated like he is wearing one.

The video has gone viral on social media with almost 4 lakh likes and watched across the planet. Rashid captioned the post as:

“No glasses but still ok going on with Trend 😂😂😂 Laka Da Mar 🐍 @harisraufofficial.

Rashid Khan is currently playing in the ongoing Pakistan Super League (PSL 2022). He had also earlier released another reel on the Puspha movie starring Allu Arjun. The video was received well by the fans and was an instant hit on social media.

Newly-added IPL team Ahmedabad, owned by CVC Capital, have roped in ace leg-spinner Rashid Khan for the upcoming edition of the IPL. The youngster parted ways with Sunrisers Hyderabad after both parties failed to come to a middle point over price issues.

Rashid, who was one of the three pre-draft picks, will earn INR 15 crores for being part of IPL 2022. Ace all-rounder Hardik Pandya will lead the side that also boasts young batting prodigy Shubman Gill.